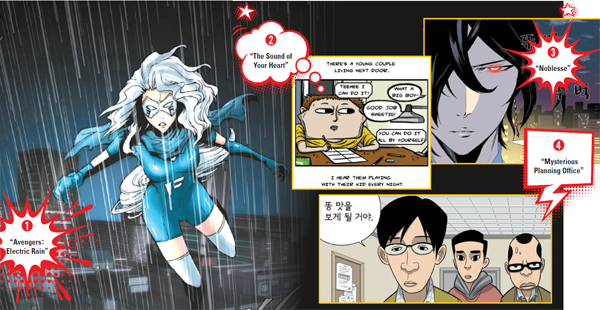 As recently as five years ago, webtoons - the Korean term for cartoon series published on the Internet - only appealed to a limited number of people who were open to consuming comics online.

But the recent webtoon boom in the country shows this is no longer the case, with experts saying that Korean net cartoons are sure to become bigger hits worldwide. During the first World Webtoon Forum held last year, Didier Borg, the CEO of French online comic website Delitoon, even announced that “webtoons will replace manga.”

The origin of the webtoon goes back to 2003 when major Korean search engine Daum (now DaumKakao) decided to serially publish the work of celebrity cartoonists Yoon Tae-ho and Kang Full. Its rival Naver jumped on the bandwagon in 2005, launching its own service under the name Naver Webtoon.

At the time, webtoons were not made with profit in mind, so the content was provided for free. But their financial potential came to light in 2006 when Kang Full’s “Apartment” became the first online comic to be adapted into a movie. 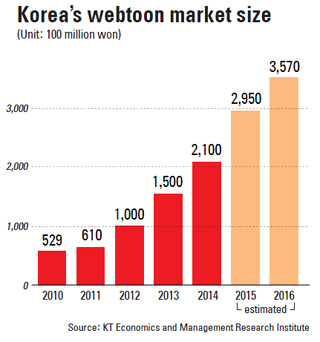 The webtoon surge in the film market reached its peak in 2013 when “Secretly, Greatly,” based on Hun’s Internet comic of the same title, recorded seven million viewers and achieved an unexpected box-office hit.

Along with the movie business, TV dramas, plays and other byproducts of the market have benefitted from using webtoons’ content and characters. One of the best examples is Kang’s “Late Blossom,” which was adapted into a film, play and TV drama.

This period of adaptations defined the first heyday of webtoons, but the industry’s pinnacle is yet to come.

Webtoons mainly differ from original comic books in the way they are formatted for reading online - from flipping through pages to scrolling up and down. Non-Korean readers say that seeing one panel at a time instead of a whole page is an especially appealing concept.

Responding to the increasing international demand for webtoons, DaumKakao recently joined hands with Marvel Entertainment to publish “Avengers: Electric Rain,” which reflects Marvel’s superhero stories but is drawn in a Korean style by cartoonist Ko Young-hoon.

The company will have to wait and see whether the collaboration is a success or not, but the cooperation itself is meaningful.

“Collaborating with a world-famous content provider was a new challenge by itself and it will be a stepping-stone for domestic artists to advance onto a global stage,” said Park Jeong-seo, an official from the webtoon service department at DaumKakao.

Last July, Naver launched its global Internet comic service, Line Webtoon. The giant search engine, which already owns a large number of good-quality webtoons, decided to translate those into three languages - English, Chinese and Taiwanese - as well as present the work of foreign cartoonists on the site.

The company explains that its main driving engine so far is an online program called Challenge League, which amateur and professional cartoonists can upload their work to and receive feedback from readers. The artists who qualify can win slots on the portal to publish work regularly. Currently, 80 percent of the artists at Naver Webtoon were discovered through Challenge League.

Its global brand Line Webtoon provides the same program. About 1,200 English webtoons and 500 Chinese webtoons are available through the service.

“Expanding the number of creators as well as the customers, thus expanding the size of the market, will lead to a sound ecosystem in the business,” explained a company official.

The success of U.S-based webtoon distributor Tapastic, owned by Tapas Media, proves how popular webtoons are in the United States. The start-up, which was founded in California’s Silicon Valley in 2002, has more than 7,000 webtoons created by some 4,000 artists. DaumKakao is one of the content providers for the site as it invested $2 million in it last year.

With the overseas market expanding, considering cultural characteristics has become a mandatory part of planning a webtoon. What kind of characters appeal to Western readers and whether or not there any specific cultural taboos that should be avoided are some of the questions that the company and its artists have to consider when building their stories.

As mentioned before, webtoons weren’t created to be profitable at first. However, with their surging popularity it was inevitable that they attracted investors and advertisements.

“If more foreign investors acknowledge the possibility of webtoons in games, dramas, films and stationery products, webtoons could go shoulder to shoulder with K-pop or games,” said Kim Chang-won, the CEO of Tapas Media. “We just have to wait until it hits a jackpot.”

Han Chang-wan, a professor of cartoon and animation at Sejong University also drew a rosy picture of the outlook for webtoons in the foreign market.

“Webtoons can even create a new paradigm for Hallyu because their format and platform can be a source of exportation as well.”

By “format,” Han gave an example of “living toon,” which is a type of genre that only exists in the webtoon business. On Line Webtoon, it is introduced under the name “Slice of Life,” and as the title suggests, it mainly focuses on trivial happenings in ordinary life.

They don’t contain a climax or a grand narrative like original comic books, but they have proven themselves with their firm fan base.

Han explained that the details of the frivolous incidents that happen on a daily basis may differ depending on the culture, but the unique format of making readers smile have the potential to be exported.

Regarding the idea that webtoon platforms can be a good source of profits if used wisely, one has to be attentive to fast-changing technology. Before, people read cartoons through websites - whether on their PCs or smartphones - so the banner ads that appeared on the page were relatively effective.

But now, an increasing number of people are accessing webtoons directly by using specialized smartphone apps. Banner ads, which are no longer as potent on websites, have moved to apps.

Experts say that it costs up to 10 billion won ($9.2 million) to put up an advertisement on a popular webtoon for a year.

“Webtoons don’t aim to make money, but due to their rising popularity many businesses have emerged from them,” a representative at Naver said.

Efforts to make the most of the potential of webtoons, both in the domestic and foreign markets, are intensifying.

The Ministry of Culture, Sports and Tourism has decided to support small and midsize webtoon platforms, including a translation service aimed at major cartoon markets such as Japan and North America.

DaumKakao launched a new webtoon brand called Gom Toon last year, which merges music, dubbed voices and sound effects with the original plotline. Instead of scrolling up and down, a panel automatically appears after another when the screen is tapped, making it simpler to read.

“In order to adjust to the format of displays and content that readers are familiar with, we thought it was appropriate to change how we make webtoons as well,” a DaumKakao official told the Korea JoongAng Daily. “Gom Toon got its initial idea from how people in their teens and 20s consumed digital contents through social media platforms.”

The experimental attempt making the most out of mobile devices has had a positive response so far. DaumKakao also said it is planning to provide an English service on some parts of the Gom Toon site and will give a brief explanation about each webtoon in English this year.

However, some warn that caution needs to be considered when globalizing webtoons.

“Because of the heterogeneity of each culture, those that contain the distinctive humor of Korea have not been successful abroad,” said Tapas Media CEO Kim.

“It is important that precise and tasteful translations take place to narrow down culture differences but double the fun.”