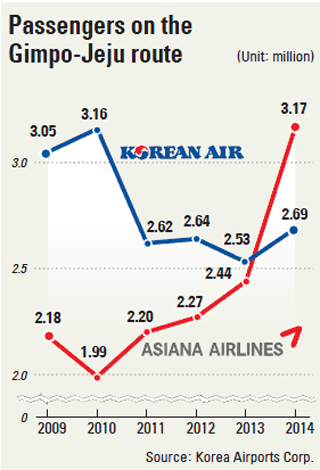 Korean Air Lines, still recovering from the infamous “nut rage” scandal, was passed by its rival Asiana Airlines for the first time in 2014 for having one of world’s busiest domestic routes.

The Gimpo-Jeju route is the only domestic route served by all seven local airlines, including low-cost carriers. According to KAC data, 13.8 million people used the route in 2014, accounting for 55.5 percent of passengers on all domestic routes.

According to 2013 data from the International Air Transport Association, Gimpo-Jeju was the world’s busiest domestic route in terms of the number of passengers, ahead of Japan’s Sapporo-Tokyo and Fukuoka-Tokyo routes.

In recent years, thanks to a flood of Chinese tourists, the number of passengers flying to or from Jeju was up 13.5 percent last year compared to 2013, according to KAC.

But KAL saw only a 6 percent increase in 2014, compared to 30 percent for Asiana.

Industry insiders credited Asiana’s aggressive expansion on the Gimpo-Jeju route for the growth spurt. KAC data showed Asiana operated 9,544 flights from Gimpo to Jeju in 2014, up 23 percent from a year earlier, while KAL operated 6,981 flights, down 5 percent.

“We are focusing more on long-haul international routes,” said a KAL official, who asked not to be named. “Besides, the Gimpo-Jeju route is well covered by our affiliate Jin Air.”

In addition, among five LCCs, Jin Air was No.1 in the route for the second straight year, ahead of rival Jeju Air.

However, KAL’s performance on international flights also left much to be desired. Data from the Ministry of Land, Infrastructure and Transport shows KAL carried 16.6 million passengers in 2014, down 0.3 percent year-on-year. In contrast, Asiana served 12.4 million passengers, up 6.1 percent.

While KAL averaged 73.6 percent of seats occupied on international flights last year - which is up 0.6 percentage point from year earlier - Asiana’s rate was 78.7 percent, up 3.2 percentage points.

Despite the figures, analysts speculate that KAL, an affiliate of Hanjin Group, will not suffer significantly as falling oil prices save the airline money.

“The downward trend of jet fuel is likely to continue in this first quarter,” said Joo Ick-chan, an analyst at IM Investment & Securities. “There are worries about revenue from fuel surcharges dropping, but compared to cheaper fuel, the amount is not that big, so there should be no problem with KAL improving its performance.”