In Korea, pay does not reflect level of experience

In Korea, pay does not reflect level of experience 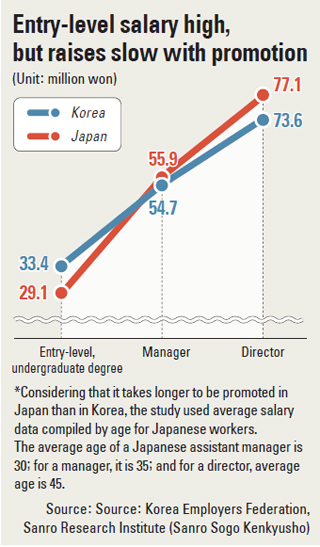 Entry-level workers in Korea with only an undergraduate degree receive higher salaries than their Japanese counterparts. But their salary increases at a much slower rate as they climb up the company’s hierarchical ladder, according to a JoongAng Ilbo report released Monday.

Japanese companies exercise a different salary system, in which small salaries are allotted to entry-level employees. But as they move up the ranks, their paychecks become fatter at an exceptionally sharp rate.

That implies that Japanese companies provide appropriate monetary compensation to their employees based on responsibility and performance. The more responsibility an employee takes on, and the better his or her performance, the more he or she is paid.

Korean employees, on the other hand, see a wide salary gap compared to the size of their company, with talent a lesser factor. 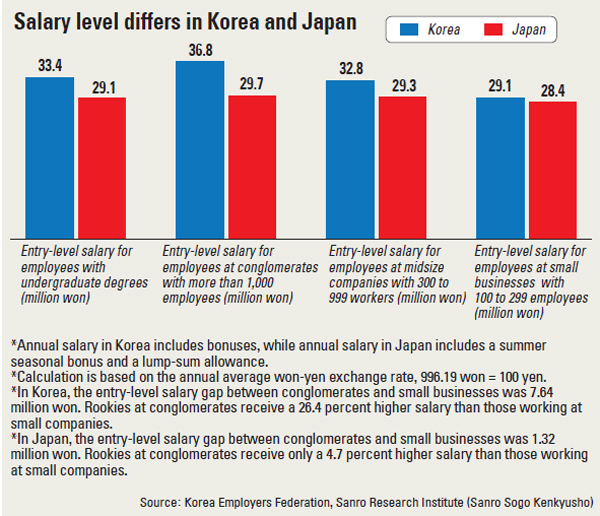 The starting wage for an entry-level employee just out of college at a conglomerate is 26 percent higher than for an employee at a small or midsize company in an equivalent position. In Japan, however, that difference is only 5 percent.

Those are just a few of the findings Monday in a JoongAng Ilbo analysis, which looked at the average starting salary for entry-level workers with undergraduate degrees in 2014. Income data was compiled by the Korea Employers Federation and Japan’s Sanro Research Institute.

The average salary level for entry-level workers here is relatively high, considering Korea’s gross national income (GNI) per capita is only at 63.2 percent when compared to Japan’s. As of 2014, Korean GNI per capita was about $24,330, whereas the Japanese GNI recorded $38,490.

“Companies tend to get competitive when setting starting salaries at a high level in order to attract quality talent,” said a human resources

executive at local conglomerate who requested anonymity. “But in fact, the largest reason why companies raise starting salary is to create a good corporate image.”

This created a salary gap of 26.4 percent.

This is very different from in Japan, where the salary gap between conglomerates and small companies is only 4.7 percent.

“In Japan, the salary gap is small between large and small companies, because each employee’s position and performance determines that person’s salary level,” said Makoto Suzuki, an assistant fellow at the Japan Institute for Labor Policy and Training. “So, the size of the employer is not a significant factor for Japanese college graduates when submitting job applications.”

In Japan, the salary level jumps as workers are promoted. The employee is handed a heavier responsibility that is presumably a larger contribution to the company.

“The most basic philosophy that underlies Japanese wage policy is that the size of compensation has to be proportionate to the size of contribution,” said Ahn Hee-tak, a professor at Kyushu Sangyo University.

On the other hand, Korean employers showed a relatively lower wage increase rate in relation to promotions.

In Japan, annual salary rises by an average of 61.3 percent when a worker is promoted from a regular staff member to an assistant manager. Korean workers see their salaries increase by only 34.2 percent in the same case.

When starting out their career, Korean workers are paid about 4.34 million won higher than their Japanese counterparts.

But the situation flips as their careers progress. Assistant managers at Korean companies are paid about 2 million won less than their Japanese counterparts.

This gap widens as the worker is promoted further, with a salary gap of about 3.9 million won at a deputy general manager level, and a 3.6 million won gap at the director level.

Making matters worse is that Korean workers are subject to a peak wage system when they reach the director level, and their work hours are reduced as they are paid less.

“High-level workers are likely to feel dissatisfied with their salary level because their paychecks are so small compared to mandatory spending,” said Kim Dong-wook, the director of public relations at the Korea Employers Federation.

“The industry should recognize that this may result in … an overall decline of corporate productivity,” Kim added.