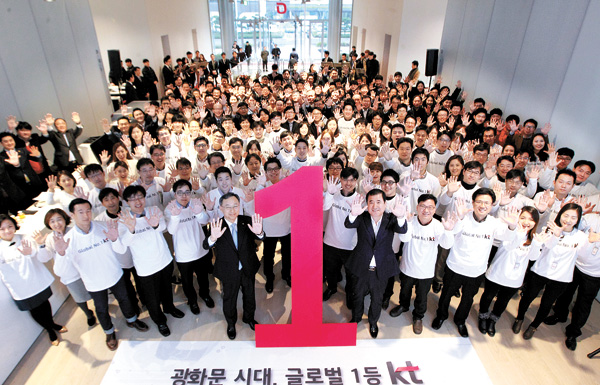 KT, the nation’s second-largest mobile carrier, has moved into a new building of its own on Monday in Gwanghwamun, central Seoul, where Chairman Hwang Chang-gyu and other executives welcomed employees arriving for work at 8 a.m. Monday.

Those who had been working in leased space in Seocho, southern Seoul, transferred to their new offices located behind the building that houses Olleh Square.

KT Gwanghwamun Building West was the heart of KT until 1999, when the headquarters was moved to Bundang, Seongnam, in southern Gyeonggi.

KT’s headquarters will remain in Bundang.

Hwang celebrated what he called the “opening of a new Gwanghwamun era” by distributing pots of flowers to arriving employees Monday morning.

The chairman said KT will generate 2 trillion won ($1.8 billion) from overseas business by 2016 and will work toward becoming a global convergence company. “We will expand our overseas business gradually with network solutions and cloud IDC technology in Africa, the Middle East and Asia,” Hwang said.

There will be 3,600 KT employees in Gwanghwamun, 1,800 each in the East and West buildings.

The new building attracted a lot of attention even in the early stages of construction because it was designed by Italian architect Renzo Piano, whose work includes the Pompidou Center in Paris.

The building has no first floor, and instead makes room for a large open space for an urban garden that includes walking paths and landscaping.

In addition, the whole structure was built using floor-to-ceiling glass to emphasize the company’s transparency. The interiors of the offices are visible from the outside.

“This year, we plan to show a wider range of performances as a company that contributes to the national interests and the economy, while taking the lead in establishing reliable communications market conditions that customers can trust.”

Hwang also met with reporters at the new building and hinted at a strong upcoming international business performance in the near future.

“There soon will be good news in energy-related businesses, such as in the intelligent power metering infrastructure and micro grids that we are establishing jointly with Korea Electric Power,” he said.

Meanwhile, Hwang will deliver a keynote speech with the theme of “5G & Beyond” at the Mobile World Congress 2015 that will be held in March in Barcelona, Spain. It is the world’s largest such gathering.