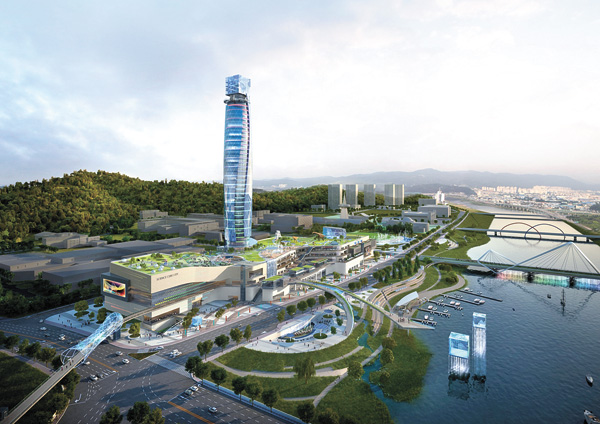 A sketch of the multipurpose complex that Shinsegae Group plans to build on the site of Daejeon Expo Park. Provided by the company

Shinsegae Group will spend about 500 billion won ($463 million) to build a multipurpose complex at the site of Daejeon Expo Park that will include a science library and an exhibition mall, a shopping mall, a hotel and a children’s park.

Construction is expected to be completed by 2018.

A consortium led by Shinsegae was selected as the preferred bidder in November over archrival Lotte Group.

“We will hire 6,000 employees at the local job fair, and Daejeon residents will be given preference in hiring,” the group said in a statement.

The Daejeon Science Complex will cooperate with nearby Hanbat Arboretum and Daejeon Museum of Art to develop diverse leisure programs for tourists, Shinsegae said.

“When completed, the Daejeon Science Complex will have an economic impact of 2.6 trillion won,” the city government said in a statement.

Some expressed concerns about whether the project can fulfill its initial promise of serving the public interest.

When government officials floated ideas for the public-private project, they agreed it should focus on promoting science.

However, when the Ministry of Science, ICT and Future Planning withheld the 50 billion won investment for the complex, some observers worried that the science promotion aspect would be compromised.

Shinsegae, however, offered reassurances that the complex will combine science and commerce.

“The Daejeon complex will be a new type of complex where science, entertainment and shopping meet,” said a representative of the group.

The engagement with the science complex also reflects Shinsegae’s long-term business strategy that centers on the shopping complex business.

The group announced last week it would invest a record of 3.35 trillion won this year to expand its multipurpose shopping complex and e-commerce business. Last year, Shinsegae invested 2.2 trillion won.

The retail group said the money will be used to build comprehensive cultural and commercial malls in suburban areas near Seoul.