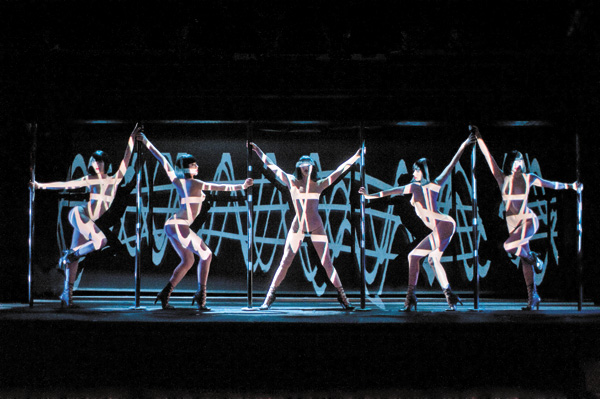 French cabaret performance “Forever Crazy” by Le Crazy Horse Paris will be arriving in Seoul for an open-ended run from April 8 at the Sheraton Grande Walkerhill Theater in southeastern Seoul. Provided by Antoine Poupel

And now this embodiment of progressive Parisian culture, which has been touring the world since completing a 12-year stint at the MGM Hotel in Las Vegas in 2012, is on its way to Seoul.

“Korean audiences have elevated taste. That is the reason why we selected the venue in Korea rather than other Asian countries,” said Philippe Lhomme, chairman and managing director of Le Crazy Horse Paris.

Lhomme recently visited Korea with his team to announce his plans to launch an open-ended run of the show from April 8 at the Sheraton Grande Walkerhill Theater in southeastern Seoul.

“Seoul has been popular for Asian tourists from various countries. I appreciate being able to stage ‘Forever Crazy’ here because it will be a good opportunity for us to make a big name for ourselves in Asia,” the chairman explained.

One of the leading cabaret acts in Paris, along with Moulin Rouge and Lido, Le Crazy Horse Paris has drawn attention since its premiere in 1951 with its fascinating performances. Topless dancers, who are selected through fierce auditions, execute seductive and sophisticated choreography throughout the show.

A significant uniqueness of the act is its use of light. The numerous elaborate illuminations reflect the dancers’ nude bodies while they perform, keeping the audience rapt.

Contrary to expectations, the gender ratio of viewers is usually fifty-fifty because cabaret is seen as high class in France.

“I hope Koreans will discover French eroticism while watching the show. It’s not an obscene performance, it’s art,” said Lee Byoung-soo, the president of W&Fun Entertainment, the agency that has imported the French show to Korea. “It is hard to find a show that has a long run of more than 65 years. This means its content has the power to fascinate audience.”

Numerous artists have collaborated with Le Crazy Horse Paris. Some created work influenced by its performances.

“Well-known female singers such as Christina Aguilera and Beyonce were inspired by the dancing in the show and recreated the choreography for their songs,” said W&Fun Entertainment in a press statement.

“Famous shoe designer Christian Louboutin joined ‘Forever Crazy’ and made all the shoes for the dancers,” said Lee. “Also, globally loved artist Salvador Dali created a lip-shaped sofa that appeared in the show. It is an aggregation of arts rather than a show.”

According to the agency, the performance is being reformatted for the stage in Korea. It will be made up of several scenes selected from Le Crazy Horse Paris’s long history.

“Fourteen scenes represent the beauty of women with different themes such as love, pleasure and fashion,” said Lee.

Lhomme added, “The atmosphere of the original show in Paris is quite different. The performance will be more tempting and entertaining compared to the original one.”

The show, which is for adults only, runs from Monday to Saturday at the Sheraton Grande Walkerhill Theater in Gwangjang-dong, southeastern Seoul. A bottle of Champagne will be served per two people. Prices will be announced in the near future.