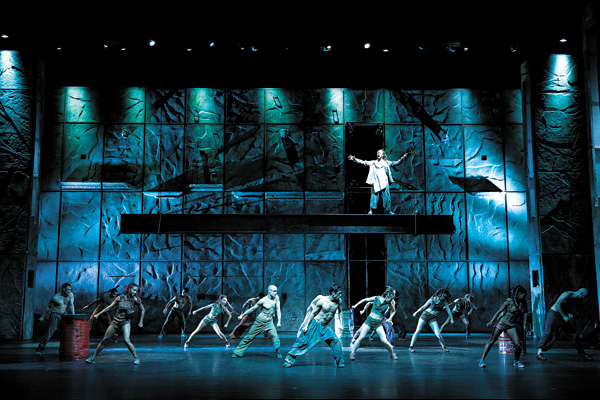 French musical “Notre Dame de Paris” will run through Feb. 27 at the Sejong Center for the Performing Arts in central Seoul. The musical is sung in French.Provided by the organizers

The team behind the original production of “Notre Dame de Paris” in France is currently performing in Seoul while the whole creative team of “Gone with the Wind” flew to Korea to help stage the Asian premier of the of French musical. And although it’s not a musical, Parisian cabaret act Crazy Horse Paris is getting ready for an open-ended run of “Forever Crazy” in Seoul on April 8.

For Korean viewers who are less familiar with French performances, the actors and creative directors of the two musicals advise them to pay attention to the dancing in the shows.

“The real charm of French musicals is the choreography behind the lead characters when they are singing,” said Kim Pub-lae, who plays Rhett Butler in the Korean production of “Gone with the Wind.” 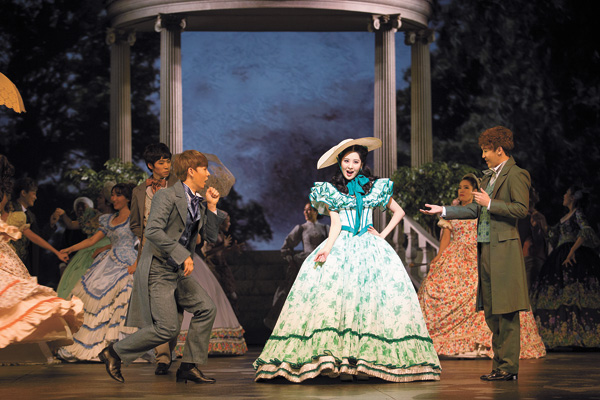 The Korean production of the French musical “Gone with the Wind” will be staged through to Feb. 15 at the Seoul Arts Center in southern Seoul. Provided by the organizers

“It may seem distracting at first to those who are not too familiar with French musicals,” Kim continued. “Some can say it interrupts them from focusing their attention on the characters’ singing at the moment, but when you really pay attention to the dance moves and look at the stage as a whole, you’ll realize that the choreography actually is so in harmony with the lyrics and the emotions of the lead characters that it helps the audience to feel the emotions of the characters.”

As the French musical pays extra attention to issues surrounding the enslavement of and inequality against African Americans during the American Civil War than the film it is based on, the actors who play the slaves say it was difficult for them to dance, sing and move around in the show because of the strong emotions they needed to convey.

Park Song-gwon, who plays the chief of slaves, says the number “Tous les Homes,” in which he sings with the company is like “sprinting a 100-meter run without breathing.”

Park said he’s been working out for four months especially for this scene, which is considered a highlight of the show.

Han Dong-geun, who made his musical debut with “Gone with the Wind” and also plays the chief of the slaves, agreed and said it was hard to sing and move while putting his emotions into every dance move, as choreography is such an important part of French musicals.

Despite the difficulty, Han has been garnering much attention with his powerful voice as a musical actor despite this being his debut.

It will be the first time in 10 years for “Notre Dame de Paris” to be performed in French - the original creative team insists the musical is the most beautiful when sung in French - so it’s easy to miss the choreography behind the show. Despite being a sung-through musical, which means there’s no spoken dialogue in the show, “Notre Dame de Paris” is known to have the most difficult choreography out of the French shows of its kind.

It requires modern dancers, breakdancers and even acrobats. For the world tour of the musical, which started in Korea and will end in Paris next year, eight Korean dancers have been picked, according to Kim Yong-gwan, CEO of Mast Entertainment, the show’s Korean producer.

The musical’s choreographer Martino Mullen says, “As the choreography has a high level of difficulty, we recruit highly talented dancers from around the globe.

“This show is also significant as it also includes a lot of modern dance,” Mullen continued. “There are not many audiences at modern dance performances, but the millions of people who are in the audience for this show can watch it and have the opportunity to encounter and appreciate the beauty of modern dance.”

In addition to the choreography, the accompanying French compositions, says musical actor Michael Lee, will appeal to the Korean audience.

“This is my fourth French musical here in Korea,” said Lee, who plays Ashley Wilkes in “Gone with the Wind.”

“French musicals definitively seem to have grasped romanticism, and because of the passion of the Korean people, I think they love to hear music that is so filled with the idea of romance, love and passion. I think that aspect of French musicals can also appeal to the Korean audience.”

“Gone with the Wind” is currently being staged at the Seoul Arts Center in southern Seoul and will run through to Feb. 15.

“Notre Dame de Paris,” will run at the Sejong Center for the Performing Arts in central Seoul until Feb. 27.