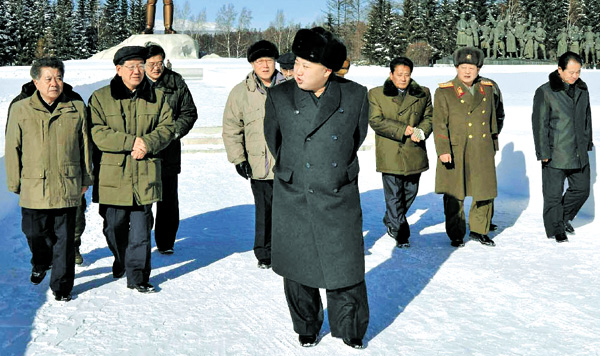 From left: Han Kwang-sang; Hwang Pyong-so; Kim Pyong-ho; Kim Yang-gon; Kim Jong-un; an unidentified provincial official; Kim Won-hong and Hong Yong-chil are seen visiting the revolutionary battlegrounds in November 2013, in Samjiyon, Ryanggang Province. North Korea’s state media reported on Nov. 30, 2013, that Kim, accompanied by eight senior officials, visited the statue dedicated to his late grandfather and the country’s founder, Kim Il Sung. Intelligence authorities later concluded that Kim and his eight aides decided upon the ouster and execution of Jang Song-thaek, Kim’s once-powerful uncle. Pak Thae-song and Ma Won-chun also accompanied Kim on the trip and are among his eight aides, though they are not pictured. [Rodong Sinmun]

In the fourth year of his rule, young North Korean leader Kim Jong-un has reshaped Pyongyang’s elite inner circle with a group of loyalists who have contributed to purging older-generation politicians, an analysis by the JoongAng Ilbo’s Unification Research Institute showed.

The institute has analyzed the rise and fall of top North Korean officials since Kim Jong-il’s death in December 2011.

During Kim Jong-un’s reign over the past few years, eight officials who accompanied him on a trip to Samjiyon in 2013 have risen in Pyongyang’s elite ranks.

His visit to Samjiyon, located in Ryanggang Province near Mount Paektu, is observed to have marked a dramatic turning point in his rule. The trip took place before the fall and execution of Jang Song-thaek, who was Kim’s powerful uncle, political guardian and one-time protector. 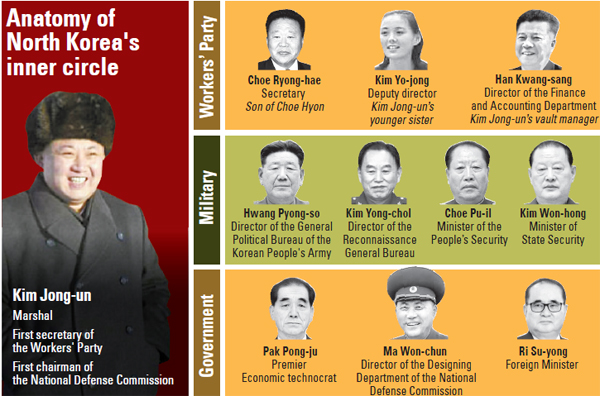 Jang was dismissed from his post on Dec. 3, 2013. Five days later, he was publicly expelled from the ruling Workers’ Party.

His arrest was broadcast by the state media, and on Dec. 13, 2013, North Korean media announced that Jang had been tried by a special military tribunal and then executed.

The eight officials who accompanied Kim to Samjiyon were considered to have influenced his decision to eliminate Jang.

The personality cult of what is known as the Mount Paektu bloodline also plays an important role in the legitimacy of Kim’s rule. 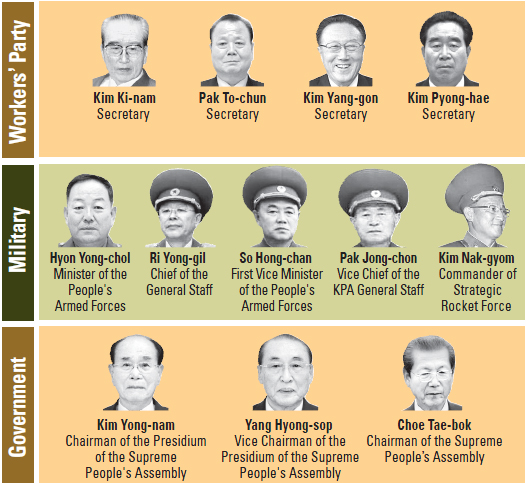 The lineage refers to the descendants of Kim Il Sung, the founder of North Korea, who reportedly led guerrilla activities from the mountain against Japanese forces.

The regime has repeatedly stressed the importance of keeping the country’s leadership based on this bloodline to justify its hereditary dictatorship.

Based on the cult surrounding the Kim family, Samjiyon is regarded as a sacred place, and the North’s state media repeatedly promoted Kim’s trip to Samjiyon - before and after Jang’s execution - calling it a “rigorous march.”

Following Jang’s execution, the accompanying officials have transformed into the capital’s new heavyweights, earning them the nickname in the South as the “Samjiyon Eight.”

The young ruler has also awarded top posts to those who supported his biological mother, Ko Young-hee, so that he would be chosen as the heir despite being the youngest son.

Hwang was promoted as director of the General Political Bureau, the top military post in North Korea, while Jo Yon-jun was appointed as the first deputy director of the Workers’ Party.

Ri Su-yong, Pyongyang’s former ambassador to Switzerland who assisted Kim during his study abroad there, was named foreign minister.

Minister of the People’s Security Choe Pu-il was able to retain his position as the North’s senior domestic law enforcement official despite the fatal collapse of an apartment building in Pyongyang. Observers in the South speculated that his retention was due to his personal ties to Kim. Choe was also Kim’s childhood basketball coach.

Choe Ryong-hae, son of Choe Hyon who served as North Korean defense minister from 1968 to 1976, serves Kim closely as well.

Although he neither participated in the plot to remove Jang nor supported Kim’s mother, he remained powerful in Pyongyang’s inner circle based on family connections to the North Korean leadership.

When he was removed from the post of the director of the military’s General Political Bureau and replaced by Hwang, it was rumored in the South that Choe had lost his power, though recent North Korean media reports show that his influence remains unchanged. He most recently visited Russia as Kim’s special envoy, meeting with Russian President Vladimir Putin.

Premier Pak Pong-ju and Vice Premier Ro Tu-chol, meanwhile, lead the cabinet and are in charge of economic policies.

Additionally, Ri Yong-nam, 55, is North Korea’s external economic affairs minister and has been in charge of development projects within the country’s special economic zones. 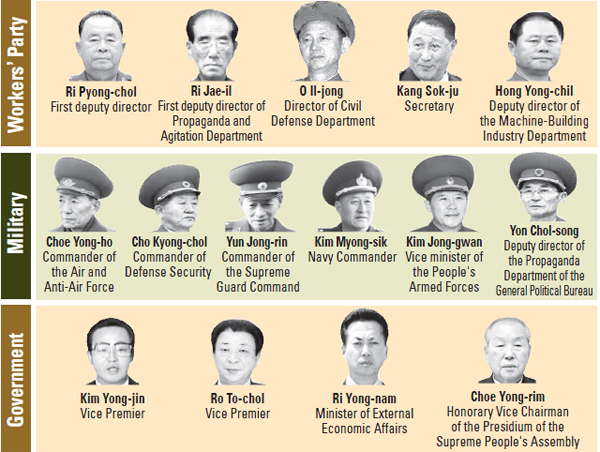 Established last June, the Ministry of External Economic Affairs is a government organ that was formed when the Trade Ministry, the Commission for Joint Venture and Investment, and the State Economic Development Commission merged.

As Kim selected new confidants and appointed them to key posts, the officials who once wielded influence in Pyongyang have now been removed.

The seven men who walked along Kim Jong-il’s hearse during his funeral procession have since lost their power.

Kim Jong-il selected Ri Yong-ho, the chief of the general staff of North Korea’s military, as Jong-un’s tutor and military affairs patron, though he was purged just seven months after the young ruler took power.

The late Jang was formerly among those seven. Kim Yong-chun, Kim Jong-gak and U Tong-chuk have also been ousted.

The junior Kim has kept only two senior officials, Kim Ki-nam, the secretary of the Workers’ Party, and Choe Tae-bok, the chairman of the Supreme People’s Assembly. Both are now in their 80s.

While intelligence authorities in the South and the United States assess that the young ruler managed to take control of the regime stably, the aftermath from purging senior officials en masse has been serious. “The politics of fear over Kim’s inner circle could lower the regime’s efficiency,” said Jeung Young-tae, a senior researcher with the Korea Institute for National Unification. “It could be a factor of serious instability for the Kim regime in the long term.”