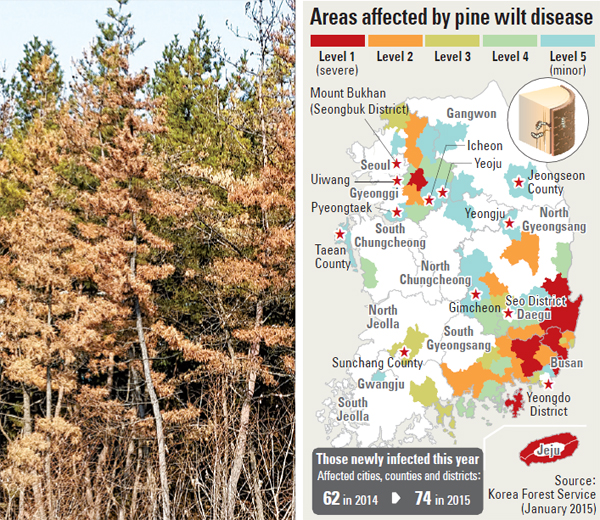 Trees affected by pine wilt disease are seen on Saturday in Pohang, North Gyeongsang. Seventy-four cities, counties and districts have been hit this year nationwide. Provided by Green Korea United

While walking toward Mount Bukhan, an officer from the Bukhansan National Park Office pointed to several Korean pines that had been cut down, with only their stumps left behind.

A tiny insect just 0.6 to 1 millimeter (0.02 to 0.04 inch) long, it penetrates the trunk or branch of pine trees and dries out the plant by blocking water circulation within the organism.

Monochamus alternatus, commonly known as a sawyer beetle, is the primary vector of pine wilt disease.

“We immediately cut down two Korean pines in April after receiving a call from a hiker that they had signs of pine wilt,” Choi said. “Afterward, we discovered eight more trees [nearby] and chopped them off as well.”

Other trees in the 50,000-square-meter (12-acre) area around Jeongneung-dong, Seongbuk District, northern Seoul, have also been sprayed with insecticide.

It was the first time the disease was spotted in Bukhansan National Park, which is situated in northern Seoul and extends out to Gyeonggi, but certainly not the only instance countrywide.

So far, 74 nationwide cities, counties and districts have been affected by pine wilt, up from 46 in 2011, according to the Korea Forest Service and Green Korea United.

Key areas include Pocheon and Yangju in Gyeonggi, and Taean County and Boryeong in South Chungcheong.

Geoje and Goseong County in South Gyeongsang as well as Yeosu and Suncheon in South Jeolla were also affected.

Environmentalists are keeping an eye on Uljin County in North Gyeongsang, where there are diamond pine trees, or Japanese red pines. Various spots around Uljin County - Ulsan, Gyeongju, Pohang and Yeongdeok County - have been hit so far.

“After starting in Gimhae, the disease spread through Changwon and Jinju,” said Seo Jae-cheol, an expert adviser with Green Korea United.

“Now, you can see an entire showroom of red pine trees up along Namhae Expressway,” he added.

Cho Jun-gyu, a deputy officer at the forest disease and pest department in the Korea Forest Service, pledged to curb the spread of the disease as much as possible before April, when sawyer beetles emerge.