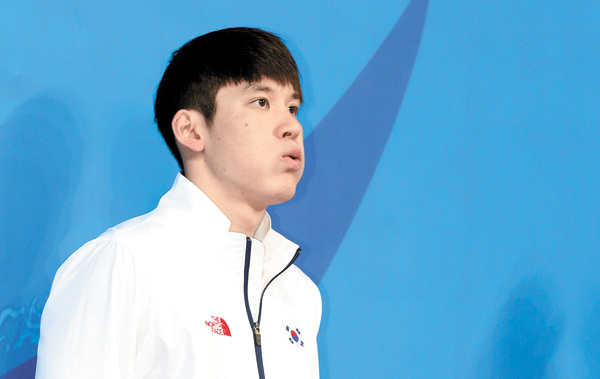 Authorities investigating four-time Olympic medalist Park Tae-hwan for doping announced on Tuesday that the 25-year-old swimmer was found to have received a shot that included testosterone, which is prohibited in international sporting events.

The Seoul Central District Prosecutors’ Office confirmed in its investigation that Park’s medical record showed he had induced a banned substance.

He will likely be banned from all competitions for two to four years.

The agency emphasized that Park did not intentionally take the banned substance and that he has avoided illegal supplements throughout his 10-year career.

“Park was offered a chiropractic and health screening for free by a local hospital,” Team GMP said in a statement. “When the doctor gave him an injection, Park repeatedly asked whether the shot contained prohibited substances. The doctor said the shot would not cause any problems, but it turned out that it did contain a banned substance.”

FINA’s penalties are in line with those set by the World Anti-Doping Agency, so Park is expected to be suspended from competing for two to four years. Even if he did not intend to take the prohibited substance, he will still be banned for two years and cannot compete in the 2016 Summer Olympics in Rio de Janeiro.

There is also a possibility that he will be stripped of the six medals - one silver and five bronze - he won in the Asian Games held from September to October because the positive test was administered in July or August, according to the statement.

Park underwent multiple doping tests during the Asiad, which were carried out by the Olympic Council of Asia, and none came back positive.

“We are working with our legal affairs team to find out the reason that the banned drug was injected and we are planning to hold the hospital liable for the incident,” the agency added in the statement.

“We are going to put every effort into explaining the situation to the Korea Anti-Doping Agency and FINA in order to keep Park from any unnecessary repercussions,” the statement said.

The agency was notified of the test result in December and did not explain why it kept the information private for a month.