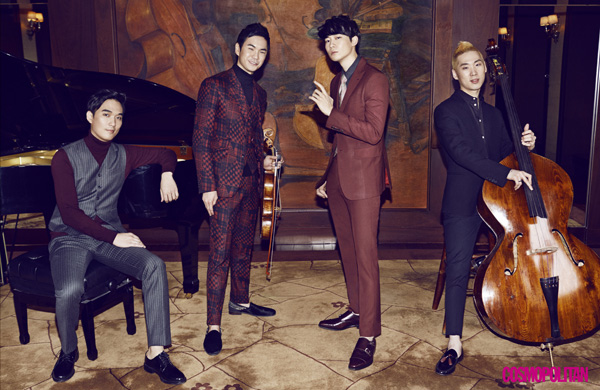 Four romanticists have gathered together for a collaboration concert. See MUSIC. Provided by the organizer

MICHAEL BUBLE
Jamsil Indoor Stadium
Feb. 4: Michael Buble, a four-time winner of the Best Traditional Pop Vocal Album award at the Grammy Awards, will hold an exciting concert in Seoul.
The talented singer-songwriter has penned hits such as “Home,” “Everything” and “Haven’t Met You Yet.”
Tickets range from 99,000 won to 253,000 won.
The show starts at 8 p.m.
Sports Complex Station, line No. 2, exit 6 or 7. 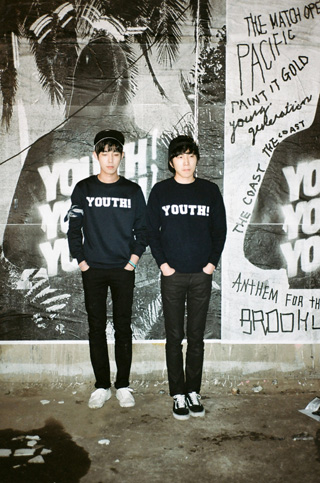 THE HOME
Egg and Nuclear Theater
To Feb. 14: Singer Lee Ji-hyeong will invite guest artists to his concert “The Home,” one of which will be randomly picked from a selection of 24 musicians to perform with him.
Guests will include renowned singer-songwriter Lee Juck and actress Yoo In-na.
The concert begins at 8 p.m. on weekdays, at 6 p.m. on Saturday and 5 p.m. on Sunday. There are no performances on Monday.
Tickets are 40,000 won.
Hyehwa Station, line No. 4, exit 2.

KIM SOO-YEON AND YIM DONG-HYEK DUO CONCERT
Seoul Arts Center
Feb. 28: Promising young classical music stars Kim Soo-yeon and Yim Dong-hyek will perform Franz Schubert’s compositions at this duet concert. The two recorded an album together ahead of the show to ensure a perfect harmony and understanding of the songs.
This is the first time that the musicians will perform together on stage.
The concert begins at 8 p.m.
Tickets range from 30,000 won to 100,000 won.
Nambu Terminal Station, line No. 3, exit 5.

ROMANTIST
Sejong Center for the Performing Arts
March 3: World-renowned violist Richard Yongjae O’Neill and three budding artists will show off their musical inspiration and talents at this concert.
Pop pianists Yoon Han and Chris Lee will perform music from romantic soundtracks and double bassist Sung Min-jae will perform jazz with O’Neill. Acclaimed songs by famous artists such as Edith Piaf and Louis Armstrong have been arranged by O’Neill for the concert.
The concert starts at 8 p.m.
Tickets range from 30,000 won to 120,000 won.
Gwanghwamun Station, line No. 5, exit 1 or 8.

CHRISTINA PERRI TOUR IN SEOUL
MUV Hall
March 10: Christina Perri made a brilliant debut performing on Fox TV’s popular TV show “So You Think You Can Dance” with the song “Jar of Hearts.”
Now, Perri is coming to Korea exclusively for a concert for the first time.
She will perform hit songs such as “Distance,” featuring Jason Mraz, and “Be My Forever,” composed by renowned British singer-songwriter Ed Sheeran.
The concert starts at 8 p.m.
Tickets range from 99,000 won to 154,000 won.
Hongik University Station, line No. 2, exit 3.

MR. SHOW
Lotte Card Art Center
To Sunday: Presented as a pure sexual fantasy for women, “Mr. Show” is a performance by eight handsome men under the direction of Kolleen Park. In this R-rated show, which is off-limits to men, the performers are clothed in various outfits - from dress suits to underwear. The agency behind the performance said it planned to produce “Mr. Show” because today’s Korean women need a place to release their stress.
Shows start at 8 p.m. on Thursdays and Fridays; 4 p.m. and 7:30 p.m. on Saturdays; and at 4 p.m. on Sundays. There are no shows Monday to Wednesday.
Tickets range from 60,000 won to 80,000 won.
Hapjeong Station, lines No. 2 and 6, the passageway between exits 8 and 9.

MARIE ANTOINETTE
Charlotte Theater
To Feb. 8: “Marie Antoinette” is being presented in Korea for the first time. The musical conveys a story of two parallel lives; the Queen of France, who is considered France’s most misunderstood monarch, and Margrid Arnaud, a poor woman. But the French Revolution changes everything. Margrid rises as a revolutionary while Marie falls.
Shows start at 8 p.m. on weekdays and 2 p.m. and 7 p.m. on weekends and public holidays. There are no performances on Mondays.
Tickets range from 50,000 won to 140,000 won.
Jamsil Station, line No. 2, exit 3.

GONE WITH THE WIND
Seoul Arts Center
To Feb. 15: The French musical version of legendary historical romance film “Gone With the Wind,” based on Margaret Mitchell’s Pulitzer-winning novel, is currently being staged in Seoul with a Korean cast. Lead Scarlett O’Hara is played by Bada, a former member of girl group S.E.S. She will alternate the role with Girls’ Generation member Seohyun.
Shows start at 8 p.m. on weekdays and 2 p.m. and 7 p.m. on weekends and public holidays.
Tickets range from 50,000 won to 140,000 won.
Nambu Bus Terminal Station, line No. 3, exit 5.

KINKY BOOTS
Chungmu Art Hall
To Feb. 22: Top-ranking Broadway musical “Kinky Boots” is coming to Korea for the first time. The performance received six Tony Awards in 2013 and won a Grammy for best musical album in 2014. The show is based on the true story of Charlie, who took over a failing shoe-making company owned by his father. He hopes to make it a huge success again by creating high heels for men. Pop diva Cyndi Lauper wrote and composed the songs for the musical, which will be reinterpreted in Seoul by Korean performers.
Shows start at 8 p.m. on weekdays; at 3 p.m. and 7:30 p.m. on Saturdays; and at 2 p.m. and 6:30 p.m. on Sundays and public holidays. There are no shows on Mondays.
Tickets range from 50,000 won to 140,000 won.
Sindang Station, lines No. 2 and 6, exits 1 or 9.

NOTRE DAME DE PARIS
Sejong Center for the Performing Arts
To Feb. 27: “Notre Dame” has become one of the best-loved musicals in the world, and the tragic love story is being presented to audiences in Korea for the first time in 10 years.
The musical centers on Esmeralda, a free-spirited female gypsy, and the three men who are in love with her: Captain Phoebus, who temporarily desires her; Archdeacon Claude Frollo, whose love is closer to lust; and Quasimodo, the hunchbacked bell-ringer of the cathedral, to whom Esmeralda is a savior.
The previous performances in 2005 and 2006 recorded the largest audience numbers within the shortest period in Korea.
Shows start weekdays at 8 p.m.; Saturdays at 3 p.m. and 7 p.m.; and Sundays at 2 p.m. and 6 p.m. There are no shows on Mondays.
Tickets range from 60,000 won to 200,000 won.
Gwanghwamun Station, line No. 5, exit 1 or 8.

LA CAGE AUX FOLLES
LG Arts Center
To March 8: The Tony Award-winning play is returning with a stunning cast that includes renowned singer Lee Ji-hoon. The show unfolds in Paris when Jean-Michel, the son of a gay couple named Georges and Albin, is trying to marry Anne, the daughter of an extreme conservative.
Shows start at 8 p.m. from Tuesday to Thursday; 3 p.m. and 7:30 p.m. on Saturday; and 2 p.m. and 6:30 p.m. on Sunday. There are no performances on Mondays.
Tickets range from 60,000 to 130,000 won.
Yeoksam Station, line No. 2, exit 7.

ROBIN HOOD
D-Cube Arts Center
To March 29: The German musical “Robin Hood,” which launched in 2005, will be staged in Korea for the first time.
Esteemed actors Um Ki-joon and Yoo Jun-sang will alternate in the role of Robin Hood while K-pop idols Kyu-hyun of Super Junior and Yang Yo-sup of Beast will take on the lead role, Prince Phillip.
Shows start at 4 p.m. and 8 p.m. on weekdays and at 3 p.m. and 7 p.m. on weekends and public holidays.
Tickets range from 60,000 won to 130,000 won.
Sindorim Station, lines No. 1 and 2, exit 1.

GISELLE
Seoul Arts Center
March 26 to 29: One of ballet world’s signature performances, “Giselle,” is being staged by the Korean National Ballet. The story is about a country girl named Giselle who falls in love with a man but dies of a broken heart after she finds out he is engaged to another girl. The popular performance has been loved internationally since its premiere in 1841.
Shows start at 7:30 p.m. on weekdays; 3 p.m. and 7 p.m. on Saturday; and 3 p.m. on Sunday.
Tickets range from 50,000 won to 80,000 won.
Nambu Bus Terminal Station, line No. 3, exit 5. 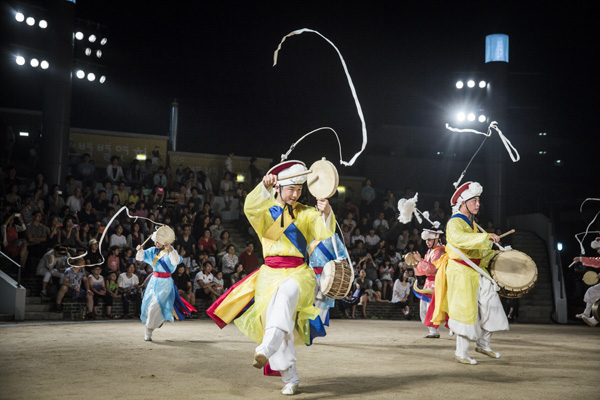 TRADITIONAL PERFORMANCE
THE NATIONAL GUGAK CENTER:
THE NEW YEAR CONCERT
Feb. 19 and 20: To celebrate the Lunar New Year, which Koreans mostly consider the biggest feast of the year, the National Gugak Center has prepared a concert.
Through the program, diverse traditional Korean instruments will be played by refined artists.