Seoul, U.S. are in agreement on North: Lippert

Seoul, U.S. are in agreement on North: Lippert 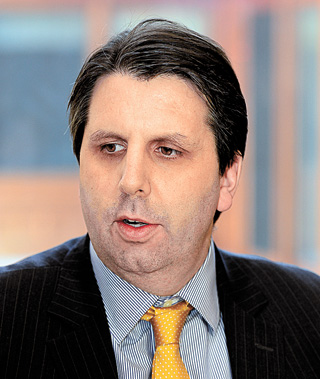 U.S. Ambassador to Korea Mark Lippert said Tuesday that Washington has no worries about the “speed or scope” of an inter-Korean dialogue proposed by President Park Geun-hye recently.

The United States is “quite comfortable there is no daylight between us” in regards to North Korea, Lippert added, underscoring Washington’s “confidence in the government of the Republic of Korea on this issue.”

During an interview with foreign affairs reporters at his residence in Habib House, central Seoul, Lippert said, “If the goal really is to get back to dialogue and resume inter-Korean talks, the South, from what we see, stands ready, and the North is again the one putting conditions and caveats on the resumption of such dialogue.”

He addressed a series of key bilateral and international issues, including the Barack Obama administration’s position on North Korean denuclearization, the trilateral alliance between Seoul, Washington and Tokyo, as well as the deployment of a U.S.-led advanced antiballistic missile system on the peninsula.

“We found that President Park’s recent proposal of a trilateral foreign ministers’ meeting is a constructive step that could possibly lead to a trilateral [leaders’] summit,” Lippert said.

He welcomed the monthly dialogue between Japan and Korea, on its sixth round, to try to resolve the issue of the Japanese military’s forcing of women and girls into sexual slavery during World War II. “In the end, we are hopeful that this engagement leads to a conclusion that is satisfactory to the people here, the government here in Korea,” he said. “That will allow us to move forward in a more robust fashion between these two very important countries that are both democratically elected and allies of the United States.”

However, he called the deployment of the Terminal High Altitude Area Defense(Thaad) antiballistic missile system a “non-issue at this point” because Seoul and Washington are not in formal negotiations. But he added that Thaad was “an effective theater defensive system that can be used to counter the threats posed by ballistic missiles” by North Korea.

Lippert has raised the profile of the American ambassador by using Twitter, writing a bilingual blog and making casual appearances in public with his floppy-eared basset hound Grigsby. His wife, Robyn, gave birth to a son in Seoul last week.

“On the policy front, we obviously want to keep this very good momentum going in 2015,” he said. “The alliance, the bilateral relationship, is extremely strong on a range of fronts.”

He also spoke about the “new addition to the Lippert household,” referring to his 8-day-old newborn son as “Sejun Lippert.”

“Both mom and baby are doing great,” he said. “Very healthy and happy, although I wish Sejun would sleep a little more.”

Lippert and his wife welcomed the birth of their son, James William Sejun Lippert, on Jan. 19. “We were very lucky and were able to get a Korean nanny who speaks Korean to Sejun,” he said. Throwing in his Korean language skills, Lippert added, “Very soon, his hankukmal [Korean language] would be better than mine.”

Q. The U.S. government has said it is always open to dialogue, but President Barack Obama suggested in his recent YouTube interview that Washington in fact seeks the collapse of the North Korean regime.

A. One of our underlying principles is to stand steadfastly with our ally, the Republic of Korea. ... Beyond that, the denuclearization of the Korean Peninsula is a paramount goal of ours; second, reunification of the Korean Peninsula under a democratically elected government and a free market economy with an administration that respects the universal human rights of the citizens; and finally more broadly, peace and security in Northeast Asia so that all Koreans can benefit from the economic vitality and the cultural dynamism that exists in Northeast Asia.

Korea’s sometimes put in a difficult position between Beijing and Washington on issues of conflicting interest such as the Thaad deployment and Seoul’s joining the Beijing-led Asian Infrastructure Investment Bank (AIIB).

It’s not a zero-sum game between the United States and China here in Korea. We very much want and support a good relationship between Beijing and Seoul. ... On the AIIB, of course this is a decision that is to be made by [Korea]. The U.S. stance on the bank is that the important thing here is to maintain the high standards with other multilateral banks, on the environment, on transparency.

What is biggest difference between Cuba and North Korea in Washington’s perspective?

In the case of North Korea, what you don’t have is a serious interlocutor on the other side of the table. When the North is ready for authentic and credible negotiations, leading to the complete irreversible verifiable denuclearization of the Korean Peninsula, this administration ... stands ready to engage in dialogue.