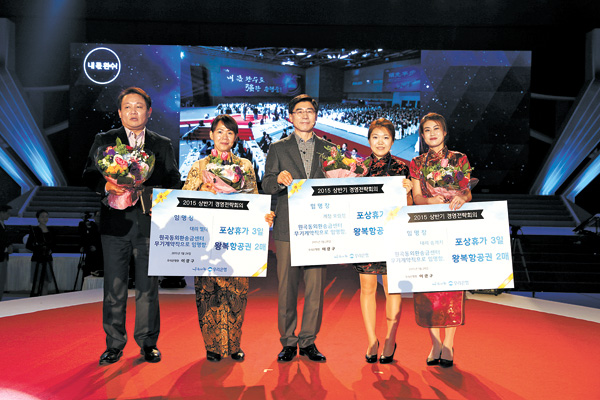 From left: Kim Jang-won, head of Woori Bank’s Ansan center, Melda Yani Ibrahim, an employee of the company from Indonesia, Lee Kwang-goo, Woori Bank President, and staff members Song Guizhi and Wu Linjing from China pose for a photo during an event held to celebrate their promotion on Saturday at Kintex, Gyeonggi. Provided by the bank

Woori Bank said on Tuesday that it is placing more emphasis on its banking services for non-Koreans by promoting three of its foreign employees at its operation in Ansan.

The staff members - Melda Yani Ibrahim from Indonesia, who is married to a Korean, and Chinese nationals Song Guizhi and Wu Linjing - have helped provide customized services to other foreigners living in Ansan, Gyeonggi, according to the bank.

Ansan is one of the greater Seoul areas that is the most heavily populated by residents from overseas.

The foreigners who live in the locale are predominantly from developing countries, including Southeast Asian nations.

The employees not only provided basic services but also helped clients from overseas use the ATM and smartphone services, the bank said.

Song, who majored in fashion at college, has particularly gained wide popularity among VIP customers from her nation for her sensitivity. Wu, on the other hand, attends to customers from several countries as she is fluent in English and Korean as well as Chinese.

The Ansan financial center also provides a specialized service to Islamic customers by offering a Musholla, or a prayer room.

The number of wire services and foreign exchanges has increased as well.

As the role of the center has become significant for Woori, the company said it has been promoted to the level of a branch.

It added that the three employees have been promoted from workers with two years on their contracts to employees with unlimited contracts.

Additionally, they will receive the same welfare benefits as regular workers, including child care leave, overtime payments and a regular pay raise.

Woori Bank said the reason it has kept the foreign employees as contract workers rather than as regular workers is to prevent them from being reshuffled to other branches as they are specialized in foreign language services.

Kim Jang-won, the head of the center, has also been automatically promoted to head of the branch.