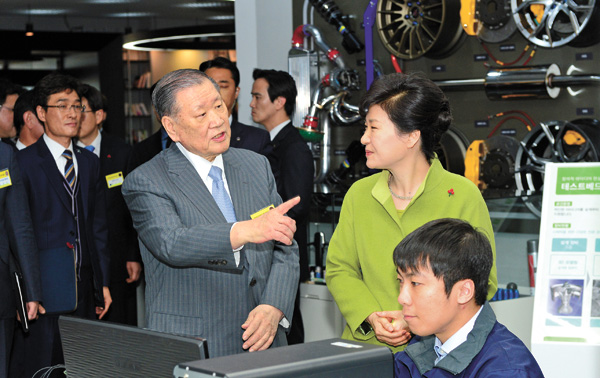 They are all part of the Korean government’s creative economy initiative, in which large conglomerates in each industry are matched with regions to help boost sagging local economies by assisting small and midsize companies and start-ups based there with cutting-edge technologies and business networks.

Hyundai and Kia were matched with Gwangju because they have been doing business there for decades.

The Gwangju center will mainly focus on enhancing the regional economy in Gwangju and South Jeolla by researching eco-friendly automotive technologies such as hydrogen fuel-cell vehicles and hybrid cars.

Of 17 creative innovation centers planned by the government, the Gwangju center is the largest in size, at about 1,190 square meters.

“Hyundai Motor has had a strong growth experience over the past decades by locally developing the first passenger car, the Pony, and becoming the world’s fifth-largest automaker in sales [in 2013],” said President Park in her congratulatory speech.

“At the Gwangju center, the company will share such growth DNA with local entrepreneurs, assisting them and establishing start-ups and nurturing them into global businesses.

“This neighborhood has been considered auspicious and it was named Oryong-dong [five dragons] because local legend says dragons lived here before ascending to heaven,” continued Park. “I hope to see many future dragons [technology start-ups] born here at the innovation center to make Gwangju the mecca of automotive start-ups and make Korea the world’s leader in hydrogen fuel cells.”

The Gwangju innovation center is special to the nation’s two largest automakers, Hyundai and Kia, because they want to focus on research on fuel-cell cars there.

Hyundai and Kia want to shift the local auto market’s paradigm to fuel-cell cars from fossil fuel-powered cars, the companies said in a statement Tuesday.

Hyundai and Kia formed a joint fund worth 177 billion won ($164 million) along with the central government, Gwangju city government and some individual investors to be spent operating the innovation center.

The center consists of two campuses, one on the GIST campus and another in downtown Gwangju. The GIST campus focuses on encouraging technology start-ups, while the downtown campus helps boost the local economy by providing IT assistance to local small business owners and people who aspire to establish start-ups.

Hyundai and Kia also decided to open some 1,000 patents they own to the public to encourage more start-ups entering the hydrogen fuel-cell business and related industries. Expanding the size of the local industry is important to develop quality technologies, the companies said in a statement.

The two automakers will pick successful technologies and business models developed by start-ups at the Gwangju center to start joint business projects within Hyundai’s R&D platforms. Once the technologies are matured, Hyundai’s internal technology arm based in Silicon Valley will help them go abroad.

At the opening ceremony Tuesday, some 12 memoranda of understanding were made among 64 public and private sector institutions to expedite building infrastructure to research hydrogen fuel-cell batteries and transform locally based auto production lines into so-called smart factories.