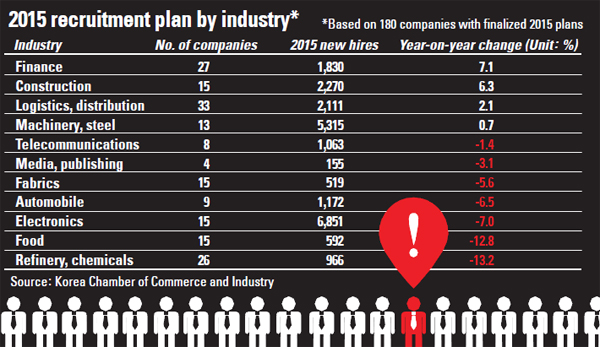 Getting a job at a well-known company has always been a top priority for college graduates, but landing that job is becoming even more difficult. A survey from the Korea Chamber of Commerce and Industry (KCCI) showed that local companies will take on fewer recruits this year than in 2014.

The KCCI on Tuesday released a poll showing that 180 companies are planning to recruit a total of 22,844 people this year, a 2.3 percent decrease from 2014. The survey conducted jointly by the business group and online job portal Incruit was sent to the country’s top 500 companies by sales, from which 305 responded.

Among the 180 companies that said they had finalized their recruitment plans, only 33 said they would hire more people than last year.

“Although the domestic economy is predicted to recover this year, there are no clear signs of recovery yet, and unstable factors like emerging markets and the Chinese economy are pushing companies to set up conservative recruitment plans,” the KCCI said in a release.

Among the 305 companies that responded, 29 said they will not hire anyone this year while 125 said they haven’t finalized their hiring plan.

Though the numbers don’t look good, not all job seekers should be disappointed. The KCCI poll showed that people who are looking for work at financial, construction, logistics or retail companies will have a better chance at getting a job, as companies in those fields increase hiring this year.

The report from the chamber showed 27 financial companies will hire 1,830 employees in 2015, up 7.1 percent from a year ago, while 15 construction companies will offer jobs to 2,270 people, a 6.3 percent increase year-on-year.

But in general, it will be tough for recent graduates to get a job at a big company. Among the top 30 companies, the 10 that have completed their hiring plan said they will recruit 8,780 people, down 5.5 percent from 2014.

“The job market basically depends on when the economy recovers,” said Jeon Su-bong, the executive director of KCCI’s research division. “In order to revive the economy, the government should pursue its three-year economic innovation plan on schedule, while companies should actively invest.”

Besides the KCCI, other local researchers have also released negative forecasts for this year’s job market. The Bank of Korea predicted that 450,000 people will get a job this year, which is 50,000 less than last year, while the Korea Economic Research Institute predicted 350,000 will be newly employed, 170,000 less than its number for 2014.

LG Economic Research Institute predicted 510,000 people would be hired, which is smaller than the 580,000 hired last year.

Experts said that because many companies are restructuring to survive, especially large ones such as Hyundai Heavy Industries and KT, which is affecting the ability of their suppliers and other SMEs to increase hiring.

“We need the power of job creation by enhancing flexibility in the labor market,” said Cho Joon-mo, professor of economics at Sungkyunkwan University.