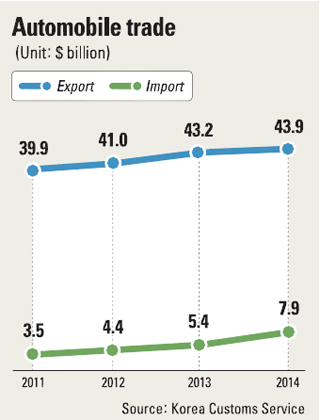 According to the customs agency, the total export value of Korean cars was $43.9 billion last year, up 1.6 percent from a year earlier, while the value of imports hit $7.97 billion, which is a 45 percent increase from a year ago. As a result, the country’s trade surplus decreased 4.8 percent year-on-year to $35.9 billion in 2014.

The import value of gasoline cars with an engine displacement between 1,000cc and 1,500cc increased by more than 600 percent last year over 2013, while imports of diesel cars of that size were up 1,500 percent.

“As the growth of imports is larger than the growth of Korean car exports, the trade surplus last year dropped,” the customs agency said. “The result was also due to Korean automakers increasing overseas production of parts, then exporting the cars from home turf.”