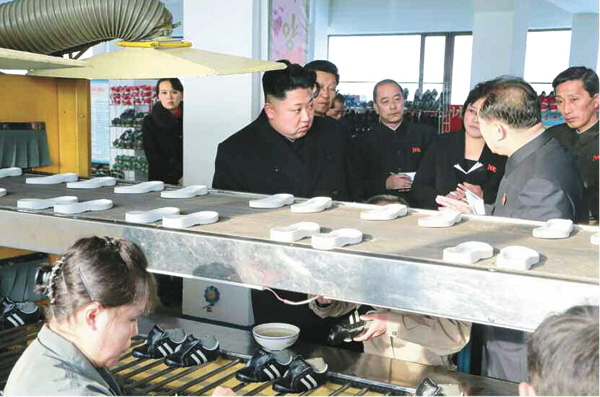 In this photo released by the Rodong Sinmun on Jan. 21, Kim Yo-jong looks toward her older brother, North Korean leader Kim Jong-un, from behind a column during his inspection of the Rywon Shoemaking Factory. [Rodong Sinmun]

The South Korean government analysts specializing in North Korea recently engaged in a new game of hide-and seek with 26-year-old Kim Yo-jong, the younger sister of the reclusive regime’s leader, whose movements have been difficult to track.

Kim Yo-jong, appointed as the deputy director of the country’s ruling Workers’ Party, emerged as a key member of Pyongyang’s political elite after she began accompanying her brother, North Korean leader Kim Jong-un, to public events in November.

And yet, she has not been prominently portrayed in the photographs run in the North’s media, including the Rodong Sinmun. She is often spotted in the corner of the pictures, which has proved challenging for South Korean intelligence authorities trying to follow her movements.

The 26-year-old spent her childhood with Jong-un when he studied abroad at the International School of Berne in Switzerland. During the funeral of their father, Kim Jong-il, in December 2011, she made her first public appearance. Wearing a traditional black Korean dress, she stood, teary-eyed, behind her older brother.

At the beginning of Jong-un’s reign, she used the name Kim Ye-jong and worked as a manager in the Propaganda and Agitation Department of the Workers’ Party, tasked to refine her brother’s image as national leader.

“Kim Jong-un has just two young daughters, so she is being prepped in case of an emergency,” a key intelligence official in Seoul said.

Aside from Yo-jong, little is definitely known about the Kim family and their movements aside from what intelligence officials have observed.

Kim Jong-un’s older brother, Jong-chol, has generally stayed outside the public eye since his younger brother took power. The 34-year-old was last spotted attending an Eric Clapton concert in February 2011 in Singapore.

Intelligence officials in the South said he appeared to be forgoing public activities so as not to burden Jong-un. Jong-chol reportedly suffers from a hormonal imbalance, intelligence officials said, and his health condition has made it difficult for him to gain political power.

Kim Jong-nam, 44, the stepbrother of Kim Jong-un, meanwhile, has long lived in exile. He left Macao, where he stayed for years with his family, a few years ago and is reportedly traveling Southeast Asia.

He visited France in September last year to meet his son, Han-sol, who is a university student there.

“Kim Jong-nam inherited a significant fortune from his biological mother, Song Hye-rim. And his father, Kim Jong-il, also made sure he was taken care of, so he is well off,” a South Korean official said.

Some observers have also speculated that Kim Sol-song, the 41-year-old half-sister of the North Korean leader, pulls the strings in Pyongyang, leading a group of advisers.

However, South Korean intelligence officials said those rumors were groundless, particularly because of the North’s monolithic leadership system.

Ri Sol-ju, 26, the wife of Kim Jong-un, has increasingly made fewer public appearances: Observers said her role seems to have been reduced as Kim Yo-jong has stepped in.

Lastly, the National Intelligence Service said that though Kim Jong-un made the shocking decision to execute his uncle Jang Song-thaek, who wielded immense power before his death, he did not purge Kim Kyong-hui. The younger sister of the late leader Kim Jong-il, now 69, who is Jang’s widow and Jong-un’s aunt, was staying in China for medical treatment, sources said, but returned to Pyongyang in October.