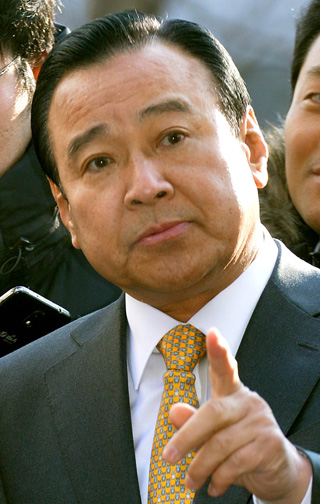 Prime Minister nominee Lee Wan-koo on Tuesday refuted new allegations about profiting excessively from a property inheritance and plagiarism in two of his academic theses.

Lee seemed to have dismissed the criticisms ahead of a confirmation hearing next week. This is the second time Lee took such a proactive move to defend himself since the former floor leader of the ruling Saenuri Party was nominated by President Park Geun-hye last Friday.

On Sunday, on his way to work in a temporary office near the Blue House, the government worker-turned-politician offered proof that he and his son did not dodge compulsory military service and also discussed his second son’s inheritance of land from his mother, Lee’s wife.

That property continued to be the cause of controversy this week.

When the mother bequeathed the property to the second son in 2011, the price jumped to as much as 1.8 billion won and it is now valued above 2 billion won. Playing the real estate market is considered underhanded in Korea, especially when it involves public figures.

But Lee said Tuesday that the initial value of the land was, in fact, 756 million won, showing the original copy of the contract to reporters. Thus, the value rose by around 2.4 times over a period of 14 years. “Whether that can be considered real estate speculation or not is up to you,” Lee said.

He added that his parents-in-law originally purchased the land to build a house after returning from the United States. His son, he reiterated, has “lawfully” paid inheritance taxes of over 500 million won.

Concerning his own failure to cite some sources in both of his masters and doctoral theses, published in 1984 and 1994 from Yonsei University and Dankook University, respectively, he admitted there could have been some mistakes or negligence but vowed to address the issue again after taking a look at the publications.

About suspicions raised by the main opposition party that his oldest son’s wife intentionally gave birth to two sons in the United States so they would have American citizenship, Lee said the son had no choice because he was studying there. As to why the eldest son reported no personal assets since 2010, he said it was because he was a student.

The ruling and opposition parties agreed to hold a confirmation hearing for Lee on Feb. 9-10. The opposition New Politics Alliance for Democracy said it finalized the list of six of its lawmakers to question Lee at the hearing. The six - including Rep. Kim Kyung-hyub and Rep. Seo Yong-gyo, both renowned for blunt questioning - have been picked to ask Lee about his personal past and current political controversies.