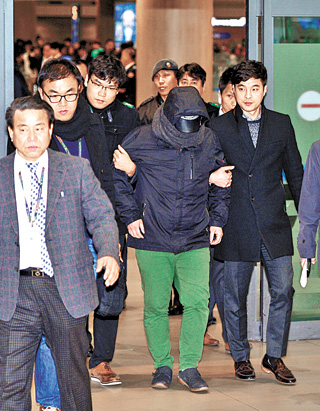 Upon his arrival at Incheon International Airport on Tuesday, police arrest the man who is alleged to have threatened to bomb the Blue House over the phone and on Twitter. [NEWSIS]

Police have arrested the man who allegedly threatened over the phone and on his Twitter account to bomb the Blue House and the private residences of President Park Geun-hye and Chief of Staff Kim Ki-choon.

The suspect was immediately apprehended Tuesday upon his arrival at Incheon International Airport. He returned to Seoul from Paris, accompanied by his father.

The 22-year-old, who was identified only by his surname Kang, is the son of a former aide to National Assembly Speaker Chung Ui-hwa. He was taken to the Gyeonggi Provincial Police Agency to be indicted on charges of obstruction of justice.

“I apologize from the bottom of my heart to President Park, Speaker Chung as well as the people,” Kang’s father told reporters at the airport. “I will do my best to have my son acknowledge his crime and calm down.”

The elder Kang tendered his resignation Friday after he was contacted by the police about his son’s threat on Twitter, posted on Jan. 17, on which the suspect said he would blow up the personal residences of President Park and Kim.

The former aide left for Paris on Saturday to persuade his son into returning to Seoul, according to the Gyeonggi Provincial Police Agency’s Cyber Bureau.

Kang presumably made the phone calls to the Blue House at around 2 a.m. on Sunday, while his father was on his way to Paris.

The young man is alleged to have made five phone calls to the Blue House over two-minute intervals from 2:39 a.m. In them, he threatened to blow up the presidential unless it showed its “willingness” by noon, though he did not provide any further explanation or direction over what he meant.

The Cyber Bureau, announcing the interim results of its investigation into the case late on Tuesday, said Kang had received treatment for mental illness in the past, citing people familiar with the situation.

An official at the National Assembly told reporters, regarding the suspect’s mental state, that his threat was not to be considered equivalent to one made by “a normal person.”

Kang was discharged from compulsory military service earlier than scheduled due to depression, and the military authority formerly considered him a soldier that needed to be “closely monitored” for his potential to cause disruptions, the source said.

Kang’s father told reporters that his son left for France on Dec. 13 without notifying his parents of his trip. They filed a missing person’s report with police, only finding out about his trip six days after his departure.