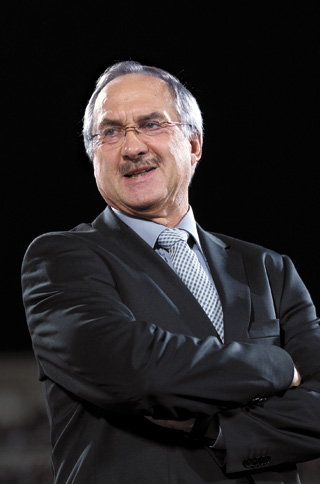 Could Uli Stielike be the second Guus Hiddink? The German manager is already off to a much better start than the Dutchman, who was nicknamed “5-0” after losing two matches 5-0 shortly after starting with the team. Stielike, on the other hand, led the Taegeuk Warriors to the AFC Asian Cup final with his own practical coaching principles just five months after he took over the team in September.

The 60-year-old has become a star among Korean football fans not only because the team is a game away from winning the title for the first time in 55 years, but also because he seems to know how to use tactics to win. The Taegeuk Warriors have not conceded any goals in the tournament and will face Australia in the final on Saturday.

Fans have started referring to the national team’s playing style as “swamp football” because teams struggle to make a comeback when they’re down a goal and seem as if they are slowly sinking into mud. The manager has gained the nickname “Dasan Stielike” for his highly technical coaching style. Jeong Yak-yong (1762-1836), who introduced the Realist School of Confucianism to the country, was commonly called Dasan.

The German manager accepted the job with the national team after meeting with Lee Yong-soo, the Korea Football Association’s technical committee chief, in London in September. Other potential candidates wanted to stay in their home countries and only come to Korea ahead of matches, but Stielike agreed to move to Korea.

When asked about his ideal style of football in a press briefing in September, the manager said, “Fans often care more about stats such as ball possession, passing success percentage, but what matters to me is only to win.”

“Tiki-taka wins some matches but long-pass play wins others. At the end, the most important thing is how smart the team is,” he added.

One of his key principles has been practicality, starting from the first friendly he coached in Korea against Paraguay in October. Stielike created his own starting lineup instead of starting with the team’s best players after reviewing recent video footage of the players and the international match appearances of each member. In that first international match, Nam Tae-hee and Kim Min-woo, who were not very popular among fans, both scored to lift Korea 2-0 over Paraguay.

The players say they appreciate the amount of respect that he gives them. Lee Jung-hyup, who joined the national team for the first time for the Asian Cup, said, “The manager tries to give me confidence by letting me do whatever I want, and he also gives me feedback.”

Assistant Coach Park Kun-ha said, “The manager has told the coaching staff from the beginning that players should lead the match from the field. He always asks the players questions to make them think independently.”

Stielike is also a meticulous and passionate man.

“There were many new players in the most recent training session in Jeju in December, but he knew their birth dates, physical data and their home clubs from the beginning,” said Lee Jae-cheol, a public relations official for the KFA.

The 60-year-old German might sound like a serious man, but he is rather sweet and gentle. He high-fives each member of the team before they enter the grounds and stays on his feet throughout the match.

And even though the Taegeuk Warriors are still busy with the Asian Cup in Australia, Stielike is also thinking about what’s going on in Korea. He often watches university league and youth matches.

“It is important to foster younger players and make the K-League even more competitive,” he said.