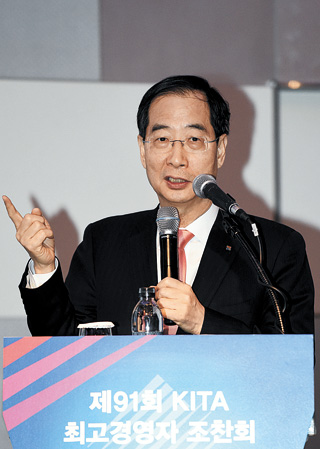 Han Duck-soo, chairman of the Korea International Trade Association (KITA), said he is strongly opposed to the government’s plan to increase tax rates.

In a speech at the 91st KITA CEO Breakfast Party held by the organization on Wednesday at Coex Inter-Continental Hotel in Samseong-dong, southern Seoul, the 65-year-old criticized the government’s economic reforms including tax hikes, increased welfare and policies led by Finance Minister Choi Kyung-hwan.

“The government says it wants to increase tax rates in order to provide more money for welfare programs, but I doubt whether tax revenues will increase like it intends,” said Han, who was the finance minister in 2005. “What we really need to know is that even if the government raises rates on value-added tax, its tax base will narrow if the economy shrinks. What the government should do is reduce the number of people who aren’t paying taxes.”

Han added that raising taxes in order to fund a series of welfare programs including free day care and school lunches might actually bring in less tax revenue.

“Those welfare programs can operate properly when the government has plenty of money,” Han said. “The government should instead focus on improving the country’s financial stability because it directly impacts the nation’s sovereign ratings.”

Han then suggested that the government adopt a single tax system, which applies the same tax rate in all categories. “Hungary applied a 16.5 percent rate on income and corporate taxes 10 years ago and it added 8 million more taxpayers,” he said. “It must be hard to adopt such a system immediately, but I think this is the type of structural reform that the nation can agree to.”

He said that with a single tax system, the government would not have to change its policy regarding collections, for instance, the year-end tax settlement. The new settlement system this year has meant that many salaried workers, particularly in lower-income brackets, have to pay more taxes. In previous years, middle-class employees received tax refunds in the settlement process that were large enough to be called a “13th-month bonus.” Many ordinary office workers expect the refund every year.

KITA’s chairman also urged the government to accept the Trans-Pacific Partnership (TPP), a multilateral FTA led by the United States, as soon as possible.

“Korea should expand mega FTAs in order to boost its economy,” Han said. “This year, the global economy is fearing slow growth and Korea’s major trade partners’ economic forecast isn’t very positive due to certain conditions, like the possibility that the U.S. might increase its key interest rate and the Chinese economy might grow slower than expected. The weak [Japanese] yen might continue this year as well.”

Han added, “We need to accede to the TPP as soon as possible. It would bring a much bigger and positive economic impact - expanding exports for intermediate goods, for instance - than a single FTA. It might also give the country the similar effects of making an FTA with Japan or Mexico.”

The TPP is a multilateral FTA among 12 nations around the Pacific rim, including the United States, Japan, New Zealand, Singapore, Chile, Mexico and Canada. The countries have been working on the FTA since 2010 and it is expected to be finalized by April. If the deal is realized, it will be the world’s largest free economic zone.

Han also said in his speech that the country should stop wasting time unnecessarily arguing over trivial matters. “The nation’s economy needs serious restructuring in order to emerge from the slump and recover global competitiveness,” he said. “In order to do that, we should adjust our economic culture of unnecessary and excessive arguments that make it difficult for the economy to operate efficiently and that lower productivity.”