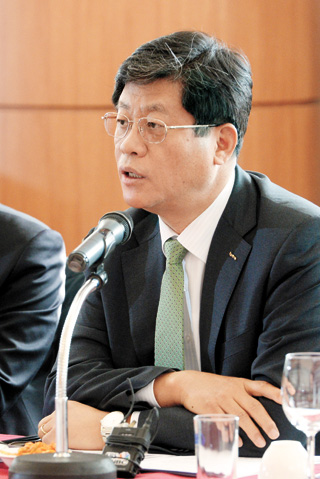 The Korea Trade-Investment Promotion Agency (Kotra) wants to increase cooperation with other trade institutions to transform local small and midsize companies into exporters.

“Under the current trade system in Korea, the country may not be able to reach its goal of $2 trillion in trade volume by 2020,” said Kotra CEO Kim Jae-hong, who took over the state-funded institution this month, at a press conference at the agency’s headquarters in Yeomgok-dong, southern Seoul. “Kotra hopes to tighten relationships with other trade institutions [like K-sure, Export-Import Bank of Korea and the Small and Medium Business Corporation], which will expedite our goal of finding sources of growth overseas.

“The open collaboration with other government institutions is mainly aimed at helping local small manufacturers export goods. We want to accelerate the financing and M&As of local small and midsize firms, making it easier for those companies to expand abroad,” he added.

Through cooperation with the other trade organizations, Kotra will help boost exports at 1,400 small companies this year through funding and training.

Helping small exporters is part of the government’s plan to make 100,000 SMEs into exporters by 2017, and 400 are expected to export goods worth $100 million.

Regarding criticism that he was only appointed because he is part of the gwanfia, a combination of the word gwalyo meaning official and mafia, Kim said that he is not part of a corrupt network, and that his experience makes him qualified for the position.

“My decades of experience at the Trade Ministry left me with strong abilities to mediate between different stakeholders, which will help me to be a successful Kotra CEO,” Kim said. “I think it is wrong to criticize all public corporation CEOs who get rehired after leaving the central government.

“Only former bureaucrats who get rehired in a high position outside the government without suitable skills should be criticized,” he added.