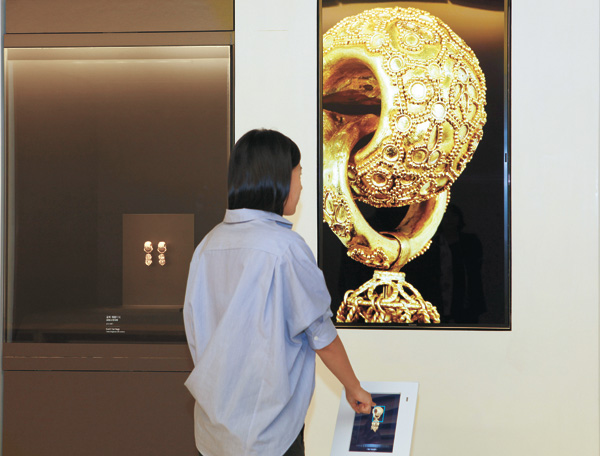 Digital technology connects the people of today with art from the past. A visitor takes a closer look at gold earrings produced during the Silla Dynasty (57 B.C. to 935 A.D.) in the sixth century at the Leeum, Samsung Museum of Art in Hannamdong, central Seoul. The real-life earrings are displayed on the left, while a highresolution image of the artifact is provided on a screen that visitors can zoom in and out of. The technology, called a digital interactive display, is part of one of Samsung Group’s cultural patronage projects. Provided by Leeum, Samsung Museum of Art

In a dimly-lit museum, getting an up-close look at ancient relics can be difficult, no matter how good your vision is.

First, all the artifacts are kept inside glass cases, and the lights are set under a certain level to minimize their impact on the ancient creations.

“They often say the lines of the drawings fade away under those lights,” said Kim Jin-kuk, a manager of the public relations team at the Leeum, Samsung Museum of Art. “For that reason, we replace ancient paintings and creations with others every two to three months.”

The older the ancient relics, the lower the lights become.

For example, the darkest section at the Leeum, located in Hannam-dong, central Seoul, is where Buddhist paintings from Korea’s Goryeo Dynasty (918-1392) are displayed.

The beauty of the fine lines in Buddhist paintings or the sophisticated decorations of Silla Dynasty (57 B.C.-935 A.D.) golden charms, which date back to hundreds of years ago, is not easily revealed.

That is where the digital guide, a cultural patronage project of Samsung Group, comes in. 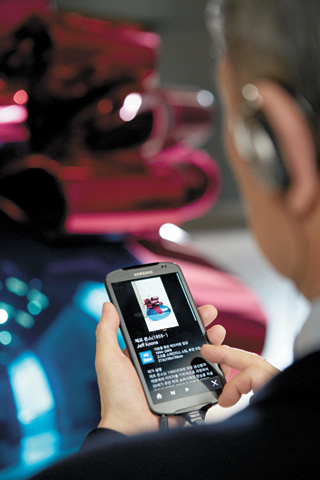 A digital guide is offered through Samsung Electronics’ Galaxy Note II so that visitors to the Leeum, Samsung Museum of Art can appreciate pieces from the past in a more detailed and dynamic view. Provided by Leeum

“Paying a visit to a museum is a very analog experience, but we wanted to enrich that by adding the technologies of Samsung Electronics, our sponsor, from when the Leeum opened,” said Park Min-sun, the general manager of the museum’s public relations team.

The service launched with the Leeum’s opening in October 2004. Visitors are given a Galaxy Note II programmed with the digital guide, different from the typical audio guides available at other museums and galleries.

The guide provides detailed information on up to 280 contemporary and ancient pieces displayed inside the museum.

Unlike audio guides that play pre-recorded voice files, visitors to the Leeum are able to select the pieces they want to discover more closely in a simple and effective way. While holding the gadget, all the visitor has to do is approach a piece and the sensor embedded inside the handheld tool automatically perceives the art and detailed images and explanations pop up.

For example, one way to appreciate a fist-sized white porcelain incense burner produced during the Joseon Dynasty (1392-1910) in 1429 is to look at the real artifact inside the glass case while zooming in on the images stored inside the digital guide and listening to information about the piece.

Without the digital guide it was almost impossible to notice the three frogs that hold the incense burner.

With the digital guide, visitors are able to see the different facial expressions of hundreds of people in the Joseon Dynasty (1392-1910) painting “Royal Procession Back to Seoul.” Provided by Leeum

People are able to turn the incense burner and other pieces over by touching the screen on the digital guide and checking out the bottom of the relics, which is usually where information on production dates and names of creators are placed.

In another Joseon Dynasty painting entitled “Royal Procession Back to Seoul,” which features hundreds of people on one vertical canvas, each person is as small as a fingernail.

But visitors are able to see the different facial expressions of all the people in the drawing by using the digital guide.

Since each artifact has a different shape and nature, detailed views are provided differently.

For instance, the museum could not display all the drawings of “Album of Ten Old Man,” a series by famed Joseon Dynasty painter Kim Hong-do, because of the limited space of its glass case.

The museum therefore stores more images of the ancient drawings from the album into the digital guide so that visitors are able to flick through it with just a few touches.

“Curators try to approach each ancient relic from a different way to help visitors have a better view and understanding of it,” said Park.

Some can be rotated a full 360 degrees in the digital guide. In order to create a single rotating view, 24 pictures are taken altogether.

“The view you have at the museum is the most handsome side but you can see the other parts of the ancient work by using the rotating view.

“Technically, we can provide visitors more dynamic views, but we don’t do that for the sake of relics,” Park said.

The digital guide connects the art of the past with the people of today, but it also bridges the gap between contemporary art that could be too avant-garde for ordinary visitors who have little background in the genre. 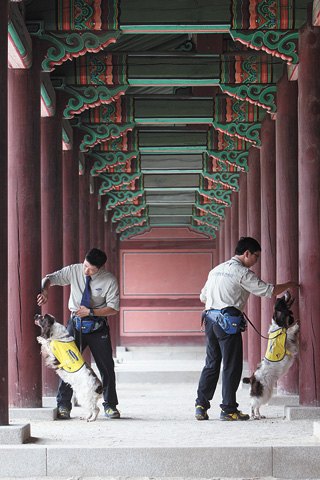 Another cultural project of a Samsung Group affiliate is nurturing and training dogs that sniff out termites, which harm wooden structures. Provided by Cheil Industries

Most of the artists who are part of the museum’s temporary exhibitions are still alive, so the digital guide plays video clips in which they introduce their works. The artists walk around the exhibition hall and explain the inspiration for each of their creations.

Since temporary exhibitions change from month to month and permanent pieces are replaced every two to three months for preservation purposes, the digital guides are updated often.

This means that curators have to repeat the time-consuming work of writing new scripts in four different languages, including Korean, English and Chinese, recording voice files and changing the positions of the sensors for each artwork.

But it’s worth it, as the guide helps to intrigue people who are not even interested in art and history.

“We all learned back in school how people back in Silla Dynasty were skilled craftsmen of golden ornaments,” said Park Gwi-ja, who was visiting the museum last week with her two grown-up daughters.

“But with a few low-quality pictures of golden crowns and charms in history textbooks, I couldn’t really get the meaning. But now I know what the history book meant,” she said as she zoomed in and out images of “Gold Earrings,” produced in sixth-century Silla era, in the Leeum’s lobby.

With the system, adornments on the gold earrings that are about the size of a sesame seed can be clearly seen blown up on the screen.

The interactive display was first shown during the 2011 Leeum exhibition “The Court Painters of Joseon Dynasty.”

With the technology the Leeum won the Best of the Best prize from the Red Dot Design Award in 2013.

For those who purchase a day ticket priced at 11,000 won ($10), which includes admission to temporary and permanent exhibitions, the use of a digital guide is included. A single ticket holder has to pay an additional 2,000 won for the gadget, however.

The device is available for people aged over 14 to rent. About 540 are stocked at the museum.

Along with the digital guide, Samsung Group also sponsors a cultural patronage project related to the preservation of Korean cultural assets.

Since Samsung Fire and Marine Insurance, an affiliate of the group, has been nurturing guide dogs for the blind since 1993, Everland, which trains guide dogs at the request of the insurance unit, has tried its hand in various fields using four-legged creatures.

One is training detection dogs.

“We wondered what we could do with dogs [to contribute to society] and came up with sniffer dogs,” said Ha Woo-jong, the public relations manager of the communication team of Cheil Industries.

Everland is a part of Cheil Industries, an affiliate of Samsung Group.

The company signed a memorandum of understanding with the Cultural Heritage Administration (CHA) in October 2007 and began using two dogs to sniff out termites at major cultural assets nationwide from August 2008.

“Termites have their own unique smell,” said Ha.

“Once you see the wooden building is being damaged by the insects, it is too late,” said Ha.

According to Ha, the CHA makes a list of major cultural assets each year and the two detection dogs and their trainers head out to investigate between April and October every year.

“Some say two dogs are not enough, but each dog is equivalent to a search group that consists of 30 people,” said Ha. “And our role ends there. Then the rest of the work goes to the CHA.”

Currently, three sniffer dogs are being trained and managed by Everland.