Shinhan is No. 1 on FSC rankings of local banks

Shinhan is No. 1 on FSC rankings of local banks 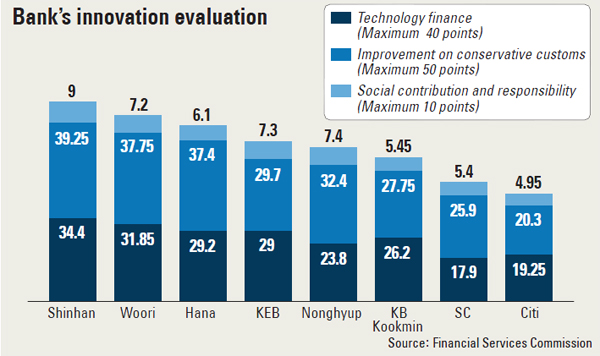 Shinhan, Woori and Hana took the top three spots among the eight commercial banks in Korea in an innovation evaluation by the government. The two foreign-owned banks, Standard Chartered Korea and Citibank Korea, took the bottom spots, while KB Kookmin Bank, which struggled due to an internal feud last year, was third to last.

The Financial Services Commission (FSC), which enforces the government’s financial policy, on Wednesday announced its bank “innovation” evaluation, the first of its kind.

In overall points, Shinhan received 82.65 out of 100 and Woori trailed behind with 76.8. Standard Chartered ranked second to last with 49.2 points, while Citibank was at bottom with 44.5 points.

The results of the evaluation reflect the major recent changes in the local banking industry. Until recent years, Woori and KB Kookmin Bank have been the top two lenders in the nation. However, the tables have turned and Shinhan has risen up the ranks as other banks were hit with controversies. Woori Bank has downsized, selling off major affiliates including its brokerage units in the hopes of privatizing, while KB Kookmin Bank and its holding company KB Financial Group have seen their public image deteriorate due to scandals including loan fraud, private information leaks and most recently a feud among top management.

But after facing a major internal management conflict in 2010, Shinhan has stayed out of the public eye and focused on business, which led to it becoming the top lender.

According to the FSC, Shinhan ranked number one in the tech category, which evaluates how generous each bank has been in providing financing for technology. This comes in the form of corporate loans and guarantees as well as investments and consultations for start-ups, and research and development projects. Shinhan scored 34.4 points out of the maximum 40.

The evaluation took into account the total amount of loans or guarantees the bank gave to tech start-ups and R&D, and the number of companies or institutions that benefited from the services. Woori and Hana ranked behind Shinhan in the category, and Standard Chartered Korea ranked the lowest with Citibank Korea coming in second to last.

In the category ranking the banks’ efforts to reform conservative and unacceptable practices and their efforts to secure new growth, Shinhan also took the top spot while the foreign-owned banks took the bottom two again.

Shinhan was given 39.25 points out of 50 and Citibank ranked the lowest with 20.3 points, while Standard Charted received 25.9.

The FSC rated the banks’ social contributions and responsibilities based on how much financial support they gave to lower-income households, how many people were hired last year, and volunteer work.

Among the seven regional banks, Busan Bank was No. 1 and Jeju Bank came in last.

The FSC said in its evaluation that the common trait among the top banks was that the labor costs compared to the net profit were low, which it said proves that banks that make bold changes and contribute to financial innovative services also become more profitable.