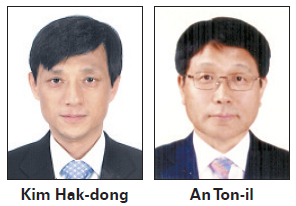 Not only is this the first major reshuffle since Kwon Oh-joon became chairman in March 2014, but it also comes two months early. The company traditionally announces executive changes at its shareholders meeting in March.

In addition, one of the unusual changes in Wednesday’s reshuffle is that the new heads of the steel mills in Pohang and Gwangyang were appointed simultaneously for the first time in the steelmaker’s history.

Kim is the first head of an affiliate to take the helm of the steelmaker’s main mill in Pohang.

An is considered one of the company’s top experts on mill operation and management. He was in charge of the factory business as an executive at Posco E&C and was responsible for facility management at the Gwangyang steel mill.

Jung Gi-seop from Daewoo International was appointed to head Posco’s value management department, which plays a vital role in the formulation and execution of Posco Group’s strategy.

Park Mi-hwa, a female executive of Posco ICT, was named to take charge of the information planning department.

“We have focused on this reshuffle to strengthen our internal organization as we are faced with a harsher competitive global environment,” said a Posco official. “We have increased our personnel reshuffles based on performance and expertise, while increasing the independent management of overseas operations.”