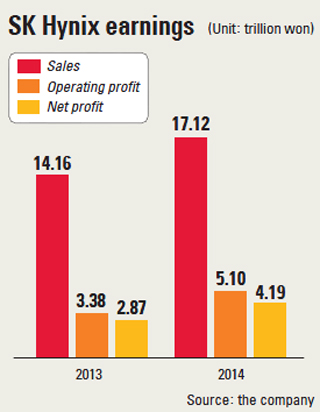 In 2011, SK Group bought chipmaker Hynix for 3.4 trillion won ($3.1 billion). While some analysts worried about the acquisition, it has turned out well, and SK Hynix is now considered the golden goose of the group.

The company on Wednesday reported record net profit for 2014, which reached 4.1 trillion won ($3.7 billion), up 46 percent from a year ago.

According to the nation’s No. 2 chipmaker, 2014 revenues were 17.1 trillion won, up 21 percent from a year ago, while operating profit also jumped 51 percent year-on-year to 5.1 trillion won.

The 2013 performance of SK Hynix was also a record for the company. The company said it managed to enhance profitability and reduce costs to get even better results. The operating profit ratio for SK Hynix was 30 percent in 2014, up 6 percentage points from 2013.

The affiliate of SK Group said that it also had an all-time high performance for the fourth quarter of 2014, with net profit of 1.62 trillion won, more than double the 789 billion won a year earlier. Operating profit increased 112 percent year-on-year to reach 1.66 trillion won in the October-December period, while revenue jumped 53 percent to 5.14 trillion won.

SK Hynix said that in the fourth quarter, dynamic random-access memory (DRAM) shipments increased 18 percent from the previous quarter, while shipments of NAND flash memory, a type of non-volatile storage that does not require power to retain data, increased by 30 percent.

For 2015, SK Hynix said it expects demand to grow boosted by the mobile and server markets. As data traffic and demand for big data analysis increases, the company forecast that demand for server memory-use DRAMs should increase, while transition to high-speed DDR4 chips should also spark growth. The chipmaker said that it will start mass-producing 20-nanometer DRAM from the first half of this year.

SK Hynix said it decided to pay a year-end dividend for 2014 of 300 won per share. A total of 218.4 billion won will be allocated. This is the second time in the company’s history that it decided to make dividend payments to shareholders.