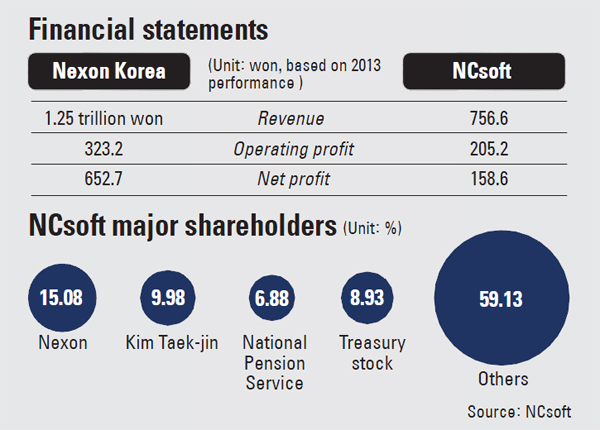 The conflict between Korea’s No. 1 game company, Nexon, and NCsoft, the second-largest online game developer, is intensifying as they fight over management of NCsoft.

Nexon is the largest shareholder of NCsoft, with 15.08 percent of shares.

There have been speculations that tensions between the two game companies were heightened by the recent promotion of Yoon Song-yee, wife of NCsoft CEO Kim Taek-jin. Yoon, who was a vice president, was promoted to president of NCsoft on Friday.

The head of the communications team at NCsoft said Nexon announced last Thursday it would participate in the management of NCsoft. Yoon’s promotion the day after the announcement was seen as a bald-faced rejection of Nexon’s proposal.

Nexon claimed the management participation proposal was intended only as a starting point for discussion. 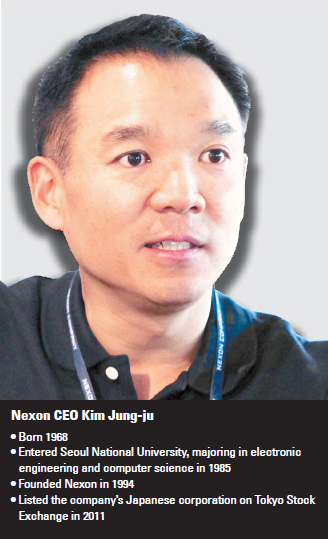 “Nexon is trying to excuse its intention to participate in NCsoft’s management,” said Yoon Jin-won, head of communications at NCsoft. “However, Nexon wanted to get involved in managerial activities even before Yoon’s promotion, as it made the announcement Thursday. Also, internal promotions are regular events this time of year.”

In addition, while NCsoft cited overseas expansion as the reason for its executive promotions, Nexon is interpreting it as a reinforcement of management control.

The No. 1 game company also accuses NCsoft of trying to consolidate family control of the business. Kim Taek-heon, an NCsoft executive and the younger brother of NCsoft’s CEO, supervises the company’s global business center.

Kim Jung-ju, CEO of Nexon, and Kim Taek-jin, CEO of NCsoft, who used to be colleagues in the first generation of Korean game start-ups, will likely face votes over Nexon’s managerial control at the regular shareholders meeting of NCsoft in March.

The companies’ conflict began early last year when the joint development team for the online game Mabinogi 2 was dismantled in January.

It had been the first cooperative project between the two companies since 2012.

Since they stopped working together on the development of Maple Story 2 in March 2014, the companies have not had any business interactions. 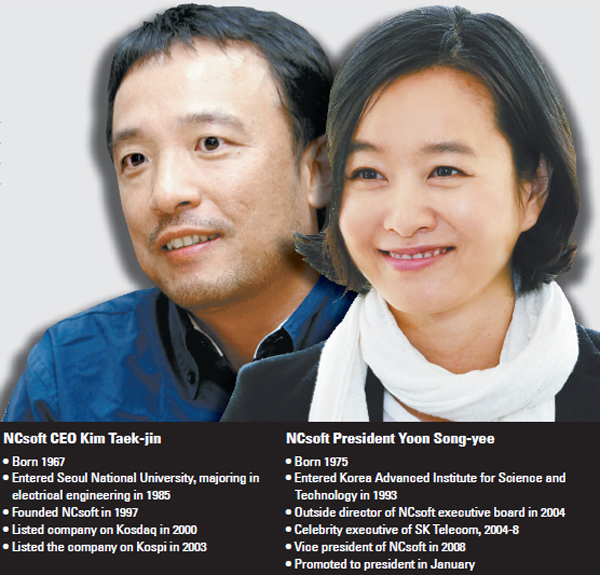 At the time, both sides said they made the decision after considering the profitability of their companies, and they would seek new types of affiliation.

However, there have been widespread concerns and complaints internally that there has been no cooperation due to differences in the two corporate cultures.

The conflict flared in October, when Nexon acquired an additional 0.38 percent of NCsoft’s shares.

As Nexon’s shares in NCsoft exceeded 15 percent, NCsoft became subject to a corporate defect review by the Fair Trade Commission.

NCsoft took a tough stance, saying it would watch carefully whether Nexon stuck to its original declared objective of simple investment.

“It is deeply regretful that Nexon, which said its purpose was only investment, changed its announcement in just three years to violate the trust,” said a spokesman for NCsoft.

Regarding the dispute, some have even raised the possibility that Nexon could be preparing to take over NCsoft, and NCsoft’s shares reached the daily price limit in stock market trading Wednesday.

With the rumors of a hostile takeover by Nexon of NCsoft, share prices of NCsoft hit the ceiling, posting a 14.81 percent gain to close at 217,000 won ($200) on the Kospi. In particular, purchases by institutional investors and foreigners pushed NCsoft shares to the limit.

“If the issue between the two companies develops into a dispute over a hostile M&A, it could further raise stock prices, but there could also be many variables,” said Hwang Sung-jin, an analyst at HMC Investment & Securities. “There will be growing uncertainty in dealing with stocks other than those that are held by major shareholders and differences in corporate cultures.”

The additional purchase in October pushed Nexon’s holdings to 15.08 percent.