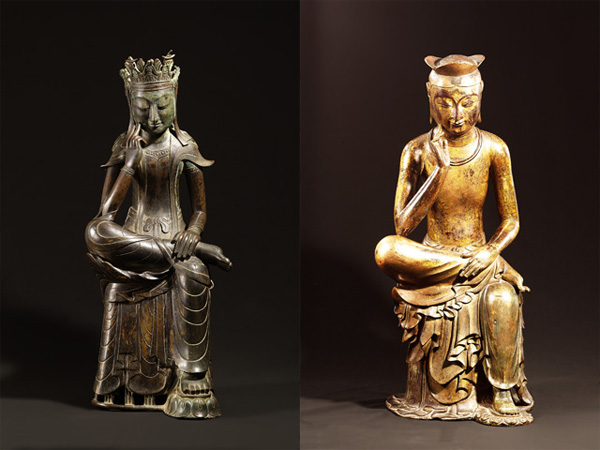 Two gilt-bronze Maitreya in Meditation statues (National Treasure No. 78, left, and No. 83) will both be shown at an upcoming exhibition at the National Museum of Korea. [JoongAng Ilbo]

Pre-seventh century Buddhist art from across the globe will be flown to Korea for an exhibition at the National Museum of Korea this year, along with glassware from the Czech Republic and the national treasures of Poland.

The National Museum of Korea in Yongsan District, central Seoul, unveiled some of the highlights of its lineup for the year ahead at a press conference on Jan. 20.

This year is important for the museum. It is celebrating its 10th anniversary since relocating to Yongsan and will be marking the 70th year since Korea gained independence from the 1910-45 Japanese colonial rule.

The exhibition on Buddhist art is slated for Sept. 24 to Nov. 15. Director Kim Young-na noted that “there has never been an exhibition [in Korea] that showcased Buddhist artworks from before the seventh century from all around the world.” 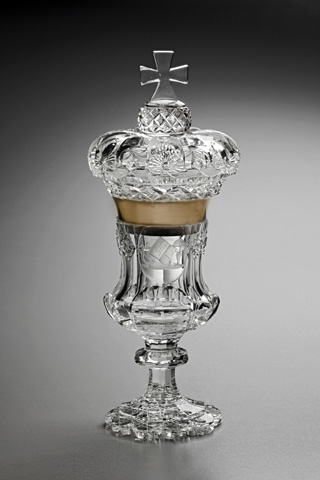 Glass craftwork from the Czech Republic, above, will be another highlight of the museum’s shows this year. Provided by the museum

Some 150 pieces will be flown from global institutions like the Metropolitan Museum of Art in the United States as well as the Tokyo National Museum in Japan.

Kim added that “[with the relocation], the museum secured larger spaces, which are more suitable for exhibitions on world civilizations.”

Since Kim took the helm of the museum in 2011, it has hosted exhibitions highlighting some of the world’s best-known civilizations such as Persia, Egypt, Turkey and Maya.

The exhibit on Poland, on the other hand, will highlight the cultural and artistic side of the East European country. Just like the show on the Czech Republic, about 340 paintings and sculptures will be coming to Korea. The exhibition will begin its three-month run on May 29 - about a month after the Czech display is over.

The National Museum of Korea, whose responsibility goes beyond hosting exhibitions, will also embark on a special archaeological exploration this year. Starting Feb. 23, the museum’s researchers will excavate Geumgwanchong, a tomb in Gyeongju, North Gyeongsang, where Korea first uncovered its famous Silla-era gold crowns.

The tomb was discovered accidentally in 1921 in Gyeongju, which was the capital of Korea’s Silla Dynasty (B.C. 57 to A.D. 935). As it was in the middle of the Japanese colonial rule, the Japanese led the excavation and a host of important relics were found there, like a golden crown (National Treasure No. 87) and a golden belt (National Treasure No. 88) that are designated as national treasures today.

“The Geumgwanchong excavation was done by non-professionals and it’s incomplete,” Kim said.

She also noted that the detailed and credible documents of the excavation process and results do not exist.

Still, Kim said that “there could also be other relics [from the area],” and should the work prove a success, the museum could also work on other tombs that were excavated during the Japanese colonization.

The exploration will take place over four months.