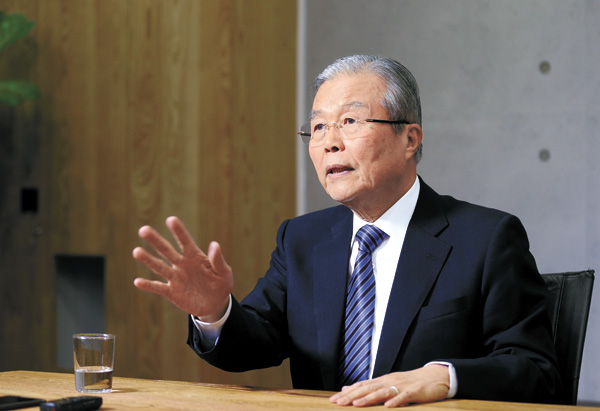 
Kim Chong-in, 74, the former chairman of the ruling Saenuri Party’s Special Committee to Promote People’s Happiness, is regarded as a proponent for the concept of economic democratization.

Article 119, Clause 2 of the Korean Constitution stipulates: “The state may regulate and coordinate economic affairs in order to maintain balanced growth and stability of the national economy, to ensure proper distribution of income, to prevent domination of the market and abuse of economic power, and to democratize the national economy through harmony among economic agents.”

The article was included in the Constitution in 1987 thanks to Kim’s persistence. At the time, the economic reformist was a lawmaker who headed the constitutional amendment economic committee.

Seoul-born Kim received his bachelor’s degree in German from Hankuk University of Foreign Studies and his master’s in economics at the University of Munster in Germany. A four-term lawmaker, he also served as a professor of Sogang University and supported President Park Geun-hye’s election campaign in 2012. He then became the chair of the Saenuri’s Special Committee to Promote People’s Happiness.

A disillusioned Kim has since been leading a quiet life, though he sat down for an interview with the JoongAng Ilbo on Jan. 19.

Q. Was the reason to specifically stipulate economic democratization as a clause in the Constitution because of the Korean tendency for corporations to control the economy?

A. In the process of compressed growth, the structure of the Korean economy and society became as distorted as can be. In order to set straight such distortions, conflict with powerful economic leaders is inevitable. For example, if the government said something to the chaebol, the chaebol would likely resist claiming it was a violation of constitutional rights and free market principles. What would the conservative Constitutional Court judges decide in a situation where the chaebol control public sentiment and the legal market? That was very obvious, so regardless of whether a clause on economic democratization is stipulated in other countries, I thought it was necessary in our Constitution.

In that case, wasn’t it naive to trust President Park and count on her for economic democratization?

I thought that there was no other politician who prioritized principle and trust like Park. When the Sejong City dilemma became exacerbated, regardless of whether an amendment was reasonable, she made a promise during her campaign, so she followed through with the original bill. I believed that a politician with that kind of conviction, who promised economic democratization, wouldn’t forsake it.

Then doesn’t that mean that both you and the people were deceived?

As President Park’s economic tutor, why did you prioritize economic democratization?

I thought it was important to raise Korea’s status in Northeast Asia in accomplishing what Japan or China cannot do. Japan in the 1950s dissolved its chaebol [zaibatsu], however, as its economy recovered in the 1960s, major economic powers again emerged. From then on, Japan’s financial circles dominated its politics, economy and media. Japanese education - rather that cultivating critical-thinking abilities - focuses on the ability to adapt. The result of that is that everything runs in perfect order without any room for criticism.

In the last elections, the Japanese Embassy in Seoul and media sought me out and asked, ‘Why do you want to try to achieve economic democratization?’ My answer was always the same: ‘So that we don’t become like you.’

But now, the Park Geun-hye administration is following in the footsteps of Japan. It is empty talk to speak of reform after 25 years of accelerated growth and 25 years of economic democratization without changing the country’s distorted framework.

The control of the market has already been passed to the chaebol from the government. Isn’t it realistically difficult, however, to return to a chaebol republic?

The chaebol themselves have to be awakened. They will have to make a decision on whether continuing in this direction is advantageous to themselves in the long run. All the administrations to date made it seem like if you didn’t include the chaebol, the economy will not recover. Even the Roh Moo-hyun administration leaned friendly on the chaebol. The Lee Myung-bak administration was one step above. The Park Geun-hye administration is the same. Until the president pushes forward, economic democratization is difficult.

The Park administration has been criticized for copying Abenomics.

[Finance Minister] Choi Kyung-hwan’s economics team does not understand Japan’s situation before Abenomics came out. They are ignoring Japan’s structural problems dating back to 1993, pouring $100 billion annually for 10 years to stimulate the economy. But they saw no effect. … While Abenomics itself seems politically sound, from the perspective of someone who knows economics, it looks difficult. But regardless, Choi’s team is still following it.

What is the biggest problem in President Park’s leadership?

Not being able to recognize a problem as a problem.

What is your next plan?

Since I have lost trust in people, I do not have much desire to talk. ... What meaning is there in talking?