President takes a day off to go to the movies

President takes a day off to go to the movies 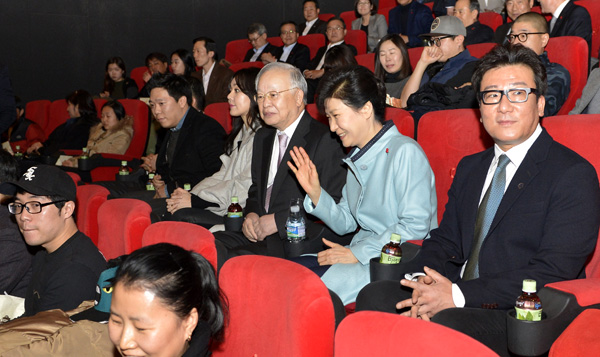 President Park Geun-hye on Wednesday takes a seat in a local cinema to watch “Ode to My Father,” a Korean film that has already attracted over 12 million viewers to become the sixth-most popular movie in Korea, along with the movie’s director Yoon Je-kyun, actor Hwang Jung-min and actress Kim Yoon-jin. [NEWSIS]

President Park Geun-hye visited a local cinema on Wednesday to see “Ode to My Father,” a Korean film that has already attracted more than 12 million viewers to become the sixth best-selling movie in Korea.

The historical drama moved the president, according to the Blue House, and she wept during some parts.

Her excursion to see the movie, which has been widely said to be “inspiring patriotism” for its historical context, came as part of her monthly routine of visiting a cultural attraction or event to mark the government-designated Culture Day, which that falls on the last Wednesday of each month.

“As many already know, the film is based on the real life of the parents’ generation, depicting their sacrifices and experiences with fun and touching scenes,” the president told the audience before the film began.

“I heard the film has greatly helped the younger generation communicate better with the elderly, which led me to realize that good cultural content contributes to social integration.”

Congratulating the film’s success, the president even told her entourage that she brought a handkerchief in case she started to cry.

Accompanying her at Yongsan CGV in central Seoul were the film’s director, Yoon Je-kyun, actors Hwang Jung-min and Kim Yoon-jin, famous for the U.S. TV series “Lost” as well as government officials in culture and executives from the film’s distributor CJ.

Nurses and miners dispatched in the 1970s to Germany, known as guest workers, and those separated from their family members during the 1950-53 Korean War were also invited.

The movie, which is entitled “Gukje Sijang” (Gukje Market) in Korean, depicts the life of a man born in 1942 who survives the 1950-53 Korean War and works to become a breadwinner during South Korea’s era of modernization.

The accumulated number of viewers surpassed 12 million as of Sunday, the sixth biggest box office in the country’s cinematic history.

The president’s comments on Dec. 29 on the hit film stirred controversy over patriotism and political ideology.

While presiding over a meeting, she cited a scene in the movie in which a married couple suddenly stop fighting to pledge allegiance to the nation as the national anthem starts to echo outside across the park they were at.

“There are lyrics in the anthem that concern loving the nation regardless of whether you are happy or in pain,” she said. “That way, our precious community could continue developing under any adversity.”

Many liberals and young people cynically dubbed the presidential remarks as anachronistic.

The movie’s story line, which was intended to depict the country’s rapid industrialization as well as the lives of those in the older generation also triggered ideological debate between conservatives and liberals.