For many teams, sports translators are key players

For many teams, sports translators are key players 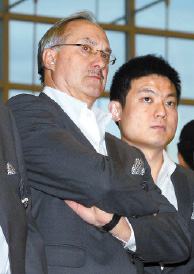 South Korea’s football manager, Uli Stielike, 60, has an interpreter who follows him everywhere. Lee Yun-gu, 30, is always there at press conferences and on the bench during matches. He even stays with Stielike on the manager’s days off.

Stielike’s mother tongue is German, but he asked for a Spanish interpreter because he speaks the language fluently after spending eight years at Real Madrid. Most importantly, his top coach, Carlos Alberto Armua, spent six years with the German manager and speaks only Spanish.

One of Stielike’s requirements was that the interpreter had to have a good knowledge of football. He interviewed 26 candidates personally and chose Lee, citing his “good mind.”

Lee grew up in England, Spain, Brazil and Germany because his father worked as a foreign correspondent. He majored in business administration at Purdue University in Indiana and speaks Portuguese, Spanish, English and German.

Before he was hired by the national team, Lee worked as a member of a personnel support team at Hyundai Motor. But his first love was football.

He was a member of the company’s football club, got an agent license and completed the K-League’s academy.

When he learned in October that the Korea Football Association was looking for an interpreter, he quickly decided it was time for a career change. Lee now works not just as an interpreter, but also as Stielike’s driver and personal secretary.

He earns only half the salary he had at Hyundai Motor, but says he is happier.

“I’m glad that I’m contributing to the team,” he said. “I have a bigger dream of working at international sports organizations, such as FIFA.”

There are about 70 sports interpreters in Korea. Professional teams began to hire interpreters as they started to accept foreign players in the late 1990s.

The vast majority are temporary workers, and they are typically required to perform additional tasks unrelated to translation. Those who spend four to five years as interpreters earn about 30 million to 40 million won ($27,000 to $36,000) a year.

Nonetheless, many interpreters love what they do.

Yu Mi-ye is a 29-year-old interpreter for Woori Bank Hansae, a professional women’s basketball team. She used to be a big fan of Coach Chun Joo-woen when Chun was a player. She joined the team as an interpreter on the recommendation of Chun after she returned from the United States in 2012.

Yu translates for the team’s two American players - Sasha Goodlett and Charde Houston - and helps them mingle with their Korean teammates.

Probably in part because of Yu’s work to help players get closer to each other, the team is leading the league with a 20-3 record so far.

“I became a fan of Chun because of her unselfish play, and I’m now helping others, too,” Yu said.

Pitcher Ryu Hyun-jin of the Los Angeles Dodgers will spend the 2015 season with a new interpreter, as Martin Kim is leaving.

Taking his place will be 39-year-old Kim Tae-hyeong, who translated for Samsung Lions pitcher Lim Chang-yong when he played two seasons with the Chicago Cubs. In addition to his interpreting duties, Kim was a cook and a personal trainer for Lim.

With Ryu, he will focus on interpreting.

“I had to help Lim a lot because he had never lived in the United States and he was in the minor leagues,” said Kim. “But Ryu has already spent two years in Major League Baseball. I will be helping him as an interpreter in away games.”

“I injured a ligament in 2003 and could not continue playing,” said Son. “I was disappointed, but then I was offered an interpreter job by a Japanese team.”

After spending a year in Japan, he moved to the Daejeon Samsung Fire Bluefangs and then on to his current team in 2010.

“It’s busy, but I’m glad that I can do a variety of work,” said Son. “I want to take advantage of my abilities because I can coach and interpret at the same time.”