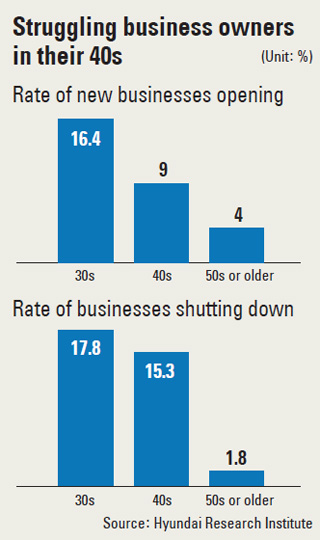 Small-business owners in their 40s struggle the most among any age group as more of their small businesses are closing than opening, according to a recent survey.

According to a study of data from 2011 to 2013 released by the Hyundai Research Institute on Thursday, 49 percent of people who start their own business - usually a restaurant, cafe, guesthouse or PC room - were retired office workers.

The study noted that many people in their 30s and 40s who had quit work were eager to start their own business rather than find a new job.

People in their 30s were not only assertive in starting their own businesses but were also able to quickly recover from previous business failures.

But people in their 50s or older had the lowest entry rate of all age groups, at 4 percent, but the rate at which they closed their businesses was also low.

Business owners in their 40s are worse off.

In fact, out of the total, people in their 40s accounted for 49 percent of entrepreneurs who closed their businesses due to the stagnant economy. In that age group, 162,000 opened a shop but 297,000 closed one.

“Not only do the number of people in their 40s account for the biggest portion among small-business entrepreneurs, but their rate of closing businesses is relatively higher than in other age groups compared to the entry rate, which is a critical situation,” said Kim Kwang-seok, a senior researcher at the research institute. “By ratio, it means that many people are failing.”

As of 2013, roughly 87,000 40-somethings had either closed their business within less than a year of opening or planned to close it. That number accounts for 15 percent of people who had started a business that year.

The number of people who started a business and wanted to continue running it was found to be shrinking. In 2011 there were 693,000. But that figure sharply dropped to 495,000.