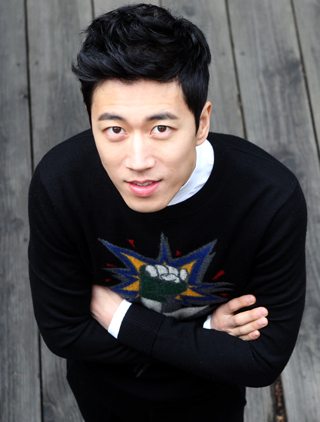 Jang Su-won, a top star from the 1990s as part of the boy group Sechs Kies, is experiencing a second wind. He’s been back in the public eye since he acted in a special celebrity edition of the TV show “Marriage Clinic: Love and War” in September.

But the reason Jang is back isn’t because of his superb acting - it was because it was so bad. It even earned him the nickname “robot actor.”

Producers of commercials and entertainment shows have been seeking him out, and he even got the lead role in “Micro-organism,” a parody of the popular tvN drama “Misaeng.”

“I’ve experienced too much popularity, and I’ve also have lost it,” said Jang in a recent interview with Ilgan Sports, an affiliate of the Korea JoongAng Daily.

Q. How do you like being back in the entertainment scene?

A. I feel reborn. I always thought that if I were to make fame happen again, I would do it with music. I never imagined I could be back in the scene as this funny, humorous character. I wasn’t the most prominent member of Sechs Kies, and I always felt like I was a bit behind the others while they got all the spotlight. The whole thing is so new to me. Before, youngsters didn’t know me at all, but now even elementary school first graders recognize me.

It won’t be easy for me to erase my unnatural acting from people’s heads. If I were to act in more serious dramas, no matter how good I was, the audience would still watch the scenes with some prejudice and would naturally lose their focus. Sometimes I think maybe I shouldn’t put any effort into getting better at acting. But I’m trying not to worry too much. I think if I show how I get better step by step then people would also gradually change their perception of me.

Do you worry that the attention on you would disappear shortly?

I think it will, so I don’t try to be obsessed with popularity. These days I film a couple of shows and commercials, but I always think there will be an end to it. I just want to continue putting effort into the work I do, just like I have been.

What did the other members of Sechs Kies say about your recent work?

Eun Ji-won was asking me how long I was going to do this robotic acting for. He said, “Just go back to your music and work as a singer.” But he can’t be the one saying those things [laughs]. He once said he would never be part of entertainment shows when he first said he would do hip-hop, but he continued with his “childish” character for several years.

Do you know what you are doing next?