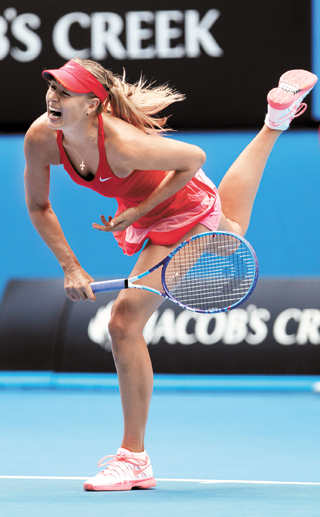 Maria Sharapova of Russia serves during the women’s singles semifinal match against compatriot Ekaterina Makarova on Thursday at the Australian Open in Melbourne, Australia. Sharapova won in straight sets.[XINHUA/NEWSIS]

Top-ranked Williams, bothered by a cold in recent days, dominated the second set of the all-American semifinal, breaking serve twice.

The 19-year-old Keys, playing in her first Grand Slam semifinal, saved seven match points on serve in a penultimate game that lasted more than 11 minutes. Williams kept her cool, wasting one match point on her serve before closing with an ace to reach her 23rd major final.

“She pushed me really hard the first set ... and I had to dig deep mentally to get through that,” Williams said, pausing to cough. “It was a little frustrating, I had like nine or 10 match points and couldn’t close it out. That doesn’t happen so much. She played like she didn’t have anything to lose.”

Sharapova, who beat No. 10-seeded Ekaterina Makarova 6-3, 6-2 in an all-Russian semifinal earlier Thursday to reach her fourth Australian Open final, has lost her past 15 head-to-head matches with Williams. Her only two wins in 18 career meetings were at Wimbledon and the tour-ending championship in 2004.

“I think my confidence should be pretty high going into a final of a Grand Slam no matter who I’m facing and whether I’ve had a terrible record, to say the least, against someone,” said Sharapova. “It doesn’t matter. I got there for a reason. I belong in that spot. I will do everything I can to get the title.”

Williams, an 18-time major winner, is back in the final here for the first time since winning her fifth Australian title in 2010.

And her semifinal win ensured she will retain the top ranking, regardless of the outcome of the final.

The 33-year-old American said she was nervous at the start, and it showed. Keys broke her serve to open and dictated many of the longer rallies with her heavy ground strokes, forcing Williams to defend more than usual.

Keys, who beat Venus Williams in the quarterfinals to reach a Grand Slam semifinal for the first time, was in control until she was broken in the sixth game.

She held in the 12th game, closing with an ace to force a tiebreaker, but quickly fell behind 4-1 with Serena firing two aces. She saved two set points with aces but had no chance of extending the tiebreaker when Williams hit another unreturnable serve, and started jumping for joy behind the baseline.

Williams broke early in the second set and raced to a 5-1 lead before Keys held, denying victory for one more game the woman who inspired her to take up tennis.

Sharapova needed 10 minutes to hold in her opening service game, fending off two break points, in the earlier semifinals.

She responded to the only service break against her in the first set by winning six straight games and seizing control of the match from the 10th-seeded Makarova, who had only taken one set off her in five previous matches.

Sharapova won the Australia Open title in 2008 but was beaten in the championship matches in 2007, by then unseeded Williams, and in 2012 by Victoria Azarenka.