Samsung has bad Q4 while LG performs much better

Samsung has bad Q4 while LG performs much better 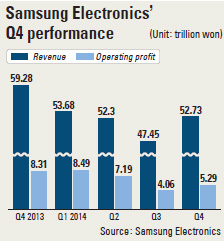 The two contrasting performances were released a day after their rival Apple reported record earnings and iPhone sales.

Samsung Electronics reported 52.7 trillion won ($48 billion) for its fourth-quarter revenue, which increased 11 percent from a year earlier, and 5.2 trillion won for operating profit, down 36 percent.

Although the company saw strong performance in its semiconductor business, the sluggish smartphone business dragged down its earnings. 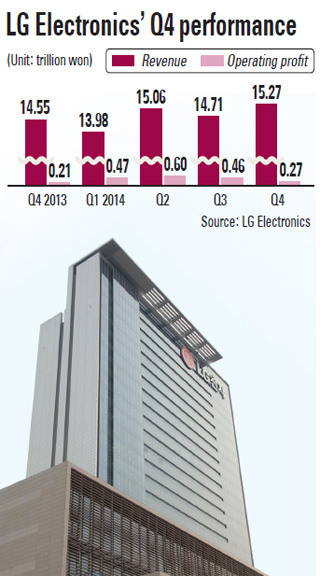 In the display business, sales of high-value LCD panels and OLED panels for premium products increased.

However, the IT and mobile (IM) business failed to raise its operating profit despite increased sales of premium phones such as the Galaxy Note 4. Its operating profit, 1.96 trillion won, shrank to one-third of the profit from a year earlier.

“Samsung’s poor quarterly performance conforms to market expectations and is not much different from its early guidance report,” said Park Young-joo, an analyst at Hyundai Securities.

“In the long term, the market’s response to the Galaxy S6 will be the most important factor for performance in the first quarter and its share price movement.”

Samsung Electronics decided to give shareholders the largest dividend ever. But the dividend yield still disappointed investors.

The dividend yield is 1.45 percent of the stock price on the final day of last year and the total amount of dividend payments will be 2.92 trillion won. That is a 40 percent increase from Samsung’s dividends in 2013.

Samsung mentioned that it planned to expand the dividends 30 to 40 percent at the end of last year. The final dividend yield will be confirmed at the annual general shareholders meeting in March.

Although Samsung’s boosting of its dividend was seen as a boon for shareholders, it also was motivated by a desire to reduce taxes on its cash reserves.

Last year the government warned local businesses that it would increase taxes on corporate cash reserves to encourage investment.

From this year, a single 10 percent tax will be imposed on companies that use less than 80 percent of their annual revenues for investment, wages and dividends.

Companies that decide not to make new investments should spend 30 percent of their revenue on pay raises or dividend increases. Overseas investments are not taken into account.

However, Samsung’s dividend yield, which remained at around 1 percent, was still low compared to global IT companies’ average of 3 to 4 percent.

According to Timothy Cook, Apple’s chief executive, excitement in China over the new iPhone 6 and iPhone 6 Plus was phenomenal.

Data released by market researcher Strategy Analytics showed that both Samsung and Apple shipped 74.5 million smartphones in the fourth quarter for 19.6 percent market shares. This was the first time since 2011 that Apple regained the top slot in smartphone sales, even though it is sharing the crown with Samsung. China’s Lenovo Group was third with a 6.5 percent market share,

According to preliminary estimates by Strategy Analytics, LG Electronics was fifth, followed by Xiaomi, which fell to sixth place from third in the previous quarter.

The full-year revenue of 59.04 trillion won was up 24 percent from a year earlier, boosted by strong smartphone shipments.

“Fourth-quarter revenue increased as a result of increased TV demand during the peak selling season in Europe, CIS and North America,” said a spokesman for LG Electronics. “Despite higher competition and weaker currency movements in emerging markets, the company is optimistic that the premium segment OLED and ultra HD TVs will continue to grow.”

Meanwhile, the company said it will pay a dividend of 400 won per share for 2014.