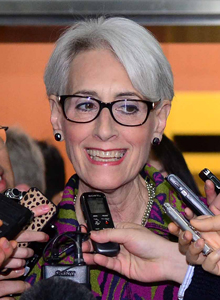 Washington looks forward to the Korean people being in a “unified country under democratic rule without any nuclear weapons,” said Wendy Sherman, the U.S. under secretary of state for political affairs.

“We have the same policy as the Republic of Korea does, and that is to ultimately have a denuclearized peninsula,” Sherman told reporters Thursday in Seoul.

She highlighted that the denuclearization of Pyongyang is Washington’s “first priority” in North Korea policy, adding that China, which has “played an important leadership role,” is on the same page on this idea.

In regard to President Barack Obama’s recent controversial Youtube interview, wherein he predicted the collapse of North Korea, she added, “I think that President Obama’s message is quite consistent with those objectives.”

She added that Washington looks to more reunions for families separated during the 1950-53 Korean War, and “for the day when all of Korean people are unified once again as we look to the 70th anniversary of the end of the World War II,” which also marks the division of the Korean Peninsula.

Next, she will hold talks with Japanese political figures and senior government officials through Friday before returning to Washington on Saturday.

Sherman’s visit to those nations came as top nuclear envoys from South Korea, Japan and the United States held talks in Tokyo on Wednesday to discuss a resumption of the long-stalled six party talks.

The six-party talks were originally formed with the two Koreas, Japan, Russia, China and the United States, with the aim of convincing Pyongyang to abandon its nuclear ambitions and to resolve security concerns on the Peninsula. North Korea pulled out of the talks in late 2008.

Tokyo and Washington expressed support for South Korea’s efforts for a dialogue with Pyongyang. The Park Geun-hye government said earlier this month that it was open to talks with the North.

Kim, the former U.S. ambassador to Seoul, told reporters after the talks that “possibilities for engaging the North Koreans, including bilateral dialogue,” were discussed.

However, “we agreed that it is important for us to continue to enforce our sanctions in light of North Korea’s continued violation of international obligations and commitments,” he said.