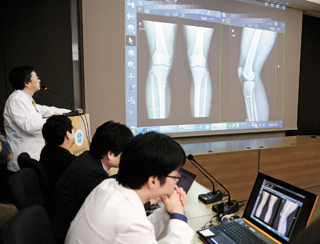 The son of Lee Wan-koo, the prime ministerial nominee, underwent a medical examination on his knee Thursday at a general hospital in Seoul to prove that his conscription exemption was legitimate and quash any draft-dodging accusations that could disqualify his father.

The MRI scan of his leg showed that the 34-year-old, a lawyer at a top law firm, had completely ruptured his anterior cruciate ligament (ACL), according to Lee Myung-chul, an orthopedics professor at Seoul National University Hospital in central Seoul.

“Based on the MRI scan, the cause of the rupture was from an injury that resulted from athletic activity,” he said. “In this case, a surgical operation was 100 percent necessary.”

Lee, who was nominated on Jan. 23, said earlier that his second son had received a grade three on a physical examination for conscription in August 2000. In the Korean military, those who receive grades one to three are subject to mandatory service.

However, in October 2004, while he was attending college in the United States, the younger Lee ruptured his ACL during a soccer match. He went back and forth between hospitals in Seoul and Michigan for an operation and treatment and underwent three additional draft examinations between July 2005 and June 2006.

He was classified in grade five on the fourth examination, which qualified him for an exemption. Young men placed in grade five are exempt from service and only required to join annual training for the civil defense service through age 40.

Questions over whether he rightly fulfilled compulsory military duty - an immensely sensitive issue for Koreans, particularly because privileged children tend to find ways to avoid the draft - is especially controversial for candidates, like his father, who aim to fill a high public position.

Many nominees have been scrutinized over allegations that their sons dodged their military duty.

“I feel sorry that I couldn’t fulfill my compulsory military duty,” the younger Lee said in front of a group of selected reporters before entering the hospital.

His father, the former Saenuri Party floor leader, expressed regret that he had to compromise his son’s privacy.

“My first son served in the military and my second couldn’t due to health concerns. That’s why I decided to have his condition publicly evaluated,” he told reporters on his way to his office in central Seoul. “It’s true he couldn’t serve his mandatory duty because he failed to properly manage his health. He will go through a public evaluation despite having to expose his face.”

The elder Lee paused briefly to fight back tears and continued: “On the one hand, I am heartbroken to think that I have become such a cold-hearted father that, in my pursuit of a public post, I have drawn public attention to my son’s physical well-being when he is not even married yet.”

Despite putting an end to accusation over his son’s military service, Lee has yet to explain separate allegations involving real estate speculation.