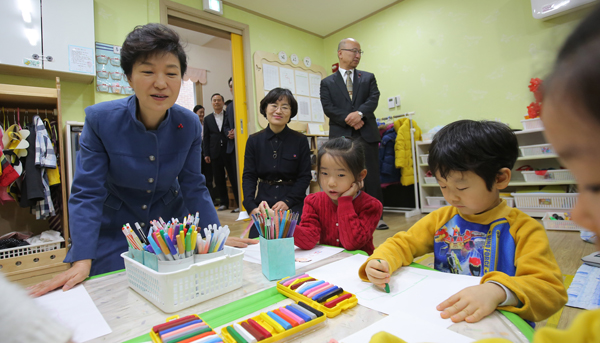 President Park Geun-hye visited a day care center Thursday in Incheon, where a series of child abuse cases at the hands of teachers have surfaced in recent weeks.

Her trip to the state-run facility came three weeks after video footage at a private day care in Yeonsu District showing a teacher smacking a 4-year-old to the ground went viral.

The president, accompanied by the minister of health and welfare, her senior secretary for employment and labor as well as related government officials, had talked with the head of the day care center and parents, and briefly interacted with the children there.

“Child care policies should be developed from the perspective of parents and children,” she said. “I think the policies also need to go through the process of being re-examined by teachers. The Health Ministry is seeking to collect opinions from experts and people like you at the scene to come up with measures to eradicate child abuse, and continue to listen to the voices of those directly engaged.”

Park later ordered the government to conduct research for a measure that would see the quality of private day care centers or those run by private corporations upgraded to be on par with those run by the state.

Health Minister Moon Hyung-pyo told her that the ministry plans to add 150 more state-run day care centers this year. As of 2013, state-funded day care centers nationwide accounted for a mere 5.3 percent of all facilities for children up to age 5, compared to 33.7 percent for private ones, according to ministry data. State-run centers guarantee better-qualified teachers at a lower cost, though with limited capacity, it is often hard for parents to get their child a seat.

The president also acknowledged the need for day care centers to install CCTV systems, even though it may not be the fundamental solution. “If trust is built [between parents and teachers], no child abuse could ever take place,” she said. “I hear that CCTVs are needed now, but how are they going to develop confidence?”

However, their installation could be a temporary solution “as other day care centers are in a transition period to become as good as this one,” she added.

The main opposition New Politics Alliance for Democracy earlier endorsed legalizing CCTV installments, saying it would pass a relevant bill during a provisional session of the National Assembly in February, despite concern it could infringe on teachers’ privacy. The ruling Saenuri Party and key government officials also came up with a plan Tuesday to push ahead with legalizing parents’ access to CCTV footage from those facilities.