Reform plan for health insurance is put on shelf

Reform plan for health insurance is put on shelf 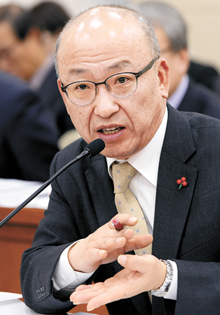 Health Minister Moon Hyung-pyo answers questions from lawmakers at a parliamentary hearing by the National Assembly’s Health and Welfare Committee on Wednesday. [NEWSIS]

The Health and Welfare Ministry’s decision Wednesday to drop its plan to overhaul the universal health insurance program has raised worries that it was made out of political calculation under pressure from the presidential office at a time when there is genuine need to reform the system.

While the government said it would further review the plan before reinstating it as an official goal, analysts think the Park Geun-hye administration is kicking the issue down the road to the next government because it is too politically risky following a tax code change in late 2013 that has backfired big time this year.

“There will be people who end up with a lighter financial burden under the reforms, but some will be unhappy over the increases in their contributions,” said Health Minister Moon Hyung-pyo Wednesday. “After deep contemplation, we have decided to delay the reforms and have a serious review.”

The government’s decision to call off long-awaited changes Wednesday came just a day before it was supposed to announce the reform plan, which has been in the planning stage for the past three years. The reform plan was going to make high-income earners contribute more every month while reducing the amount of contributions from the middle class and especially from the self-employed, who are considered to be treated unfairly.

But presidential approval ratings have sunk to their lowest level of 29.7 percent, and many attribute the fall to growing public disgruntlement over changes to the income tax code. In 2013, the government also said that only the rich would pay more and that tax hikes for middle-class salaried workers would be nominal. But as tax bills came due this month, that turned out to be a lie.

The ministry’s announcement was a complete turnaround from its vow to overhaul the current insurance program to boost payments from about 450,000 high earners while reducing payments from an estimated six million people.

Under the current system, 6.07 percent of a worker’s monthly salary is paid into the state-run health insurance program, half of which comes from the employers. For salaried workers who have extra sources of income such real estate, only people who made more than 72 million won ($66,000) on top of their salaries were required to make additional contributions to the health system.

Only 32,000 out of 2.17 million company workers with outside incomes are subject to additional contributions.

The government wanted to lower the 72 million won standard to 20 million won and forecast that up to 270 billion won would be collected in new revenues.

The Health Ministry also wanted to give a break to self-employed workers, who have complained that the system is unfair. To determine their level of payments, the current system assesses the value of self-employed people’s homes and automobiles. As a result, they sometime have higher monthly payments than people with healthy salaries - even when they are unemployed.

And laid-off people sometimes ended up being charged higher insurance premiums simply because of the value of their assets and because an employer wasn’t paying half of the contributions. A laid-off person who owns a 106-square-meter apartment in Seoul would be forced to pay more than 100,000 won monthly in premiums, even without a job.

In its reform plan, the government planned to stop the assessments of people’s assets to determine their contributions. Some six million people were going to benefit until the reform plan was abruptly shelved.

The government also proposed to require senior citizens who register themselves as being economically dependent on their children to contribute to the program if their incomes from pensions or stock investments exceed 20 million won a year, down from the current 40 million won limit.

But all of these changes have been shelved as the Blue House worries about its plummeting popularity. A dramatic hike in tobacco taxes did not help ease public suspicion that the government was paying for expanded welfare benefits with money taken from the middle class while refusing tax hikes on conglomerates and the wealthy. The Blue House stressed Thursday the national health reforms were not entirely cancelled but simply needed more study, according to its spokesman.

But it’s unlikely the Park administration will have enough political momentum to carry out the overhaul either next year or the year after as political parties will be in full campaign mode for the general and presidential elections in 2016 and 2017.