After film, shop’s future up in air

After film, shop’s future up in air 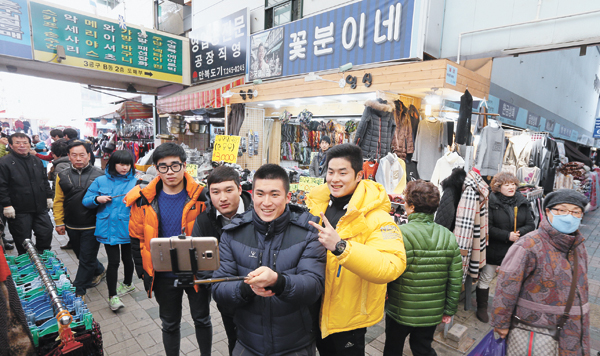 Tourists take pictures in front of Kkotbunine (Kkotbuni’s Place), the shop that appears in the movie “Ode to My Father” on Wednesday. By Song Bong-geun

The retailer who runs the small shop in Busan’s Gukje Market that features in the popular historical drama “Ode to My Father” is facing the possibility that she may have to shut down the store come March.

Since its release on Dec. 17, the movie has attracted more than 12 million viewers to become the sixth biggest box office hit in Korean history.

But now, according to Shin Mi-ran, who has run the store for nearly two years, the shop’s owner has demanded that she pay 50 million won ($45,600), following an increase in sales.

Shin has subleased the 8.25-square-meter (88-square-foot) shop since March 2013, which the shop’s owner leased through a jeonse contract, a long-term deposit, in which she agreed to put down a 5 million won deposit and 1.8 million won per month in rent.

Last July, she agreed to allow the production team for “Ode to My Father to use the venue for 10 days in exchange for 3 million won.

When she took over the business, she renamed the shop, where she mainly sells practical items like socks and belts bought from wholesalers, to Kkotbunine (Kkotbuni’s Place). Its name was then used in the film.

The film’s popularity has so far led to a 30 percent increase in sales there, which has been teeming with visitors since the movie’s debut. A sign with the protagonist’s face even hangs on the store’s entrance, inviting customers and passersby to take photos.

Still, the success has come with drawbacks, and Shin admitted in an interview with the JoongAng Ilbo on Jan. 27, that her relationships with surrounding vendors have also since deteriorated, aside from her financial dilemma.

“Even though sales have soared, I still feel uncomfortable,” she said during the interview, leaving her part-time employees to interact with potential customers.

The curtain seller who owns the shop directly facing Kkotbunine acknowledged other stores had taken a hit, adding, “My shop has suffered because visitors to [Shin’s] shop have essentially taken over this area since the movie came out.”

Shin’s financial issues first surfaced in early January, when the tax office called up Kkotbunine. The representative bombarded her questions about how she ran the business following the boost in sales.

“Did you issue cash receipts?” the official asked. “Did you complete the business registration?”

“Because I don’t own the store, and I didn’t make the contract directly with the landlord, I didn’t complete the registration back then. I never even knew that I had to,” Shin said.

Calls by the JoongAng Ilbo to the shop’s owner went unanswered when he was contacted for comment.

“I was told to pay the money by March,” she said. “Otherwise he said he would take over the business. That’s a huge amount for me, and there’s no way I can collect the money all at once. I wouldn’t have allowed the film to shoot here if I knew these things were coming.”

Yun Chul-han, the head of the Real Estate National Policy Department at the Citizens’ Coalition for Economic Justice, said that there is currently no policy or regulation in place that outlaws demanding a premium. “Because the government legally limits the jeonse price, there is a need for an upper limit on premiums to protect the self-employed,” he said.