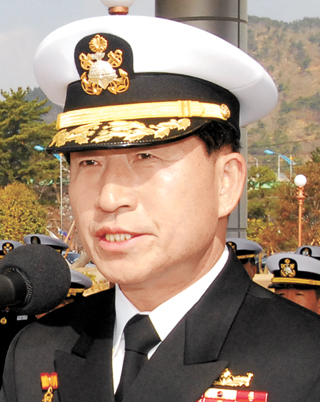 Prosecutors on Thursday arrested former Navy Chief of Staff Jung Ok-keun over suspicions that he took 770 million won in bribes from STX Corporation in 2008 through a yachting company his son founded and ran.

The authorities’ move against the former four-star general, who was arrested at his home, came a day after his son was arrested in connection with the bribery allegation.

Prosecutors arrested his son, 38, whose full name has been withheld, on charges that he pocketed 770 million won in bribes from two STX companies by recording them as advertisement fees for a yachting event he organized in 2008.

His son’s arrest Wednesday raised speculation that prosecutors might target the former Navy man if it was determined that he could have received money from the 38-year-old.

Jung’s son is alleged to have received money from STX Offshore and Shipbuilding and STX Engine for his yachting event, which was organized in Busan to commemorate the 60th anniversary of the Navy’s establishment.

The Seoul Central District Prosecutors’ Office, which has been leading multiple investigations into rampant long-standing irregularities in the military procurement industry, believe the STX Group affiliates bribed the suspect in the hope of gaining favor in its business deals with the Navy.

The son’s yachting company was only a year old in 2008.

The prosecutors are reported to have received testimony from Kang Duk-soo, the former chairman of STX Corporation now serving a six-year prison term for business irregularities, that the bribes were disguised as advertisement fees, according to Yonhap.

The elder Jung began his military service at the Naval Academy in 1975 and served as the 27th Navy chief of staff from 2008 until 2010.

As part of its investigation, prosecutors also arrested a former Navy operations commander surnamed Yoon, who is a standing adviser to STX Corporation, on Wednesday in connection to the case.

It is expected that prosecutors will request a pre-trial detention warrant for Yoon and the younger Jung on bribery charges.