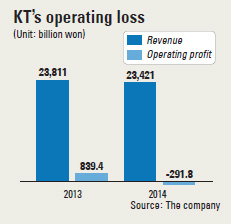 Last year was difficult for the nation’s second-largest mobile carrier KT, as the company recorded a year-on-year operating loss for the first time since it was established in 1981.

The company’s operating profit in the fourth quarter was 34.1 billion won, down 89 percent over the third quarter.

The early profit plunge was partially due to the company’s payout of 1 trillion won in early retirement fees to 3,800 employees in April, the telecom said Friday.

The fourth quarter was the worst for KT, as the company struggled to deal with the effects of the Mobile Device Distribution Improvement Act that took effect in October.

The company’s operating profit fell 89.8 percent in the fourth quarter, to 34 billion won.

KT said it hopes to see its profit and revenue recover this year after its internal reorganization because it will be spending less on personnel costs.

KT had the worst annual performance among all three major telecoms.

“This year, the Mobile Device Distribution Improvement Act will settle down in the market, which will push us to generate revenue from a wider variety of services [not simply from monthly mobile plan sales],” said KT CFO Shin Gwang-seok.

“We hope to do this by strengthening our superfast GiGA Wi-Fi service.