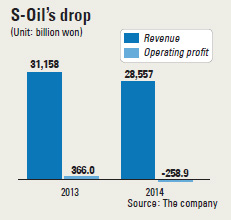 S-Oil announced its performance for last year on Friday, which showed its first operating loss since 1980.

S-Oil was hit especially hard in the fourth quarter, as more than 82 percent of its operating loss for the entire year occurred in the October-December period following the steep oil price dive and squeezed profit margins.

“With falling oil prices, losses from inventory and margins were inevitable,“ the company said in a press release. “But by reducing inventories and enhancing margins, the size of the loss was minimized.”

Global oil prices took another downturn when the Organization for Petroleum Exporting Countries declined to cut production in late November as the supply of oil extracted from shale in North America continued to rise.

The loss from the refinery business, which accounts for 80 percent of S-Oil’s revenue, was mitigated by its petrochemical and lubricant business. But even that wasn’t enough to avoid an overall loss.

S-Oil said the refinery business is likely to rebound this year because crude oil prices are expected to stabilize.

“Inventory losses will decline, and while the oversupply problem should be eased, the expansion of facilities in the industry is not likely,” said the company. “Low oil prices will give a boost to demand in the United States and China.”

The company expects the profit margin for paraxylene will recover starting from the second half of the year.