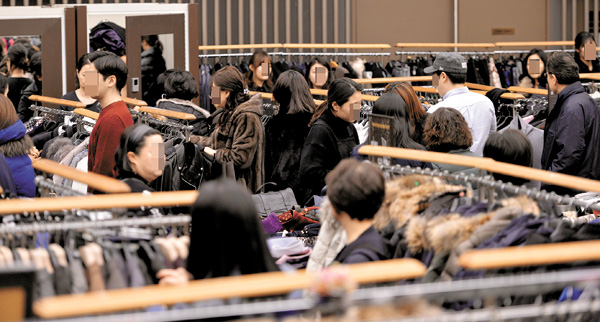 The biennial luxury goods sale that offers discounts of up to 80 percent at the nation’s top three department stores - Lotte, Hyundai and Shinsegae - has always been big, but this time more designer items will be on sale than ever before.

According to the department stores, about 310 billion won ($282 million) worth of goods will be on sale during the event, which is 30 percent more than the most recent sale in 2013, and the first time the value has surpassed 300 billion won.

The competition among the three major department store chains is already heating up. Sales at all three will officially start on Feb. 5, but some stores are holding a sales event starting this weekend on a limited selection of brands.

The event will also be held in bigger showrooms than in the past. Lotte said that its luxury sale will be held at Lotte Hotel’s Crystal Ballroom and on the flagship department store’s ninth floor next door to the hotel, an area that is twice the size as the 2013 event.

The number of participating Lotte stores has also doubled from four to eight, and the company said that 15 premium jacket and fur brands will join the sale for the first time.

Hyundai said that it will hold its luxury goods sale at two of its Seoul branches - its headquarters in Apgujeong-dong and the Coex store in Samseong-dong - rather than at one store as in past years.

The company said its sales displays will be organized by gender to make shopping easier and that Comme des Garcons, a Japanese brand that has a strong following among Korean men, will participate in Hyundai’s sale for the first time.

Shinsegae said its strategy will depend on its diverse brands. The department store has its own-branded “multishops” - a store that sells multiple brands - and about 350 brands from those stores will be included in its luxury sale.

The retail giant said that some items from designer brands, including 3.1 Phillip Lim and Yohji Yamamoto, will be marked down by 90 percent.

“We see the luxury goods grand promotion as an opportunity to spark consumer sentiment, so we have rolled out all our best strategies for distributing luxury goods,” said Hong Jung-pyo, the sales strategy manager at Shinsegae. “Some popular brands will be offered at discounts of up to 70 percent and we will try to lead the revival of domestic demand.”

All three department stores said they will give away coupons for other items based on how much a customer has spent.

The department stores are depending on the luxury goods sale this year because the slow economy has led to sluggish demand.

During the first major discount event of the year held just after New Year’s day, the department stores said their revenues increased just 0.5 to 1 percent, much less than the 4 to 7 percent increase in the same sale in 2014.

Industry insiders said that local department stores’ revenue will rise around the Lunar New Year holiday next month, but until then, they must find another way to encourage consumers to shop off-season.

“For department stores, the grand luxury goods promotion is like a last bastion as revenue from the event increases 30 percent every time,” said an official from Hyundai.

“Even if luxury goods sales are down by 10 percent on normal days, the grand luxury goods promotion keeps growing.”

Ironically, this year’s grand luxury goods sale is the biggest ever because people haven’t been purchasing high-end products, so the stores need to get rid of their inventory.

“As the period of slow economic growth continues, the inventory of luxury brands has increased by more than 30 percent on average compared to last year,” said Kim Ji-eun, who works in Lotte’s international fashion division.

For fashion brands, the event is also an opportunity to clear out items that will soon be out of season and to quickly boost revenue and brand recognition because they’re placed alongside other designer goods.

“Compared to what’s sold in outlets outside Seoul, we see more items being sold because of its location,” said a luxury brand importer who requested anonymity.

“As other many luxury brands join the promotion, the value of the brand is not damaged much.”