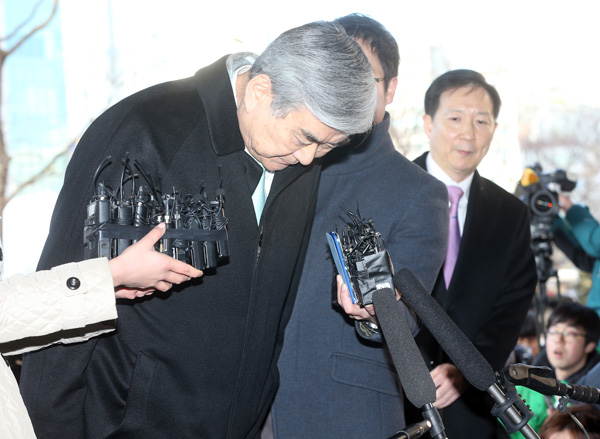 Hanjin Group Chairman Cho Yang-ho apologizes to the public after questioning Friday in the trial of his eldest daughter Cho Hyun-ah for the “nut rage” incident on Dec. 5. The father testified at the second hearing in his daughter’s trial. By Kang Jung-hyun

Hanjin Group Chairman Cho Yang-ho vowed no recriminations against Park Chang-jin, the purser ejected from the KAL flight at JFK International Airport in New York late last year, even after he testifies against Cho’s daughter.

“As the president of company, I would like to apologize to Park,” Cho Yang-ho testified Friday at the second hearing in a trial of his eldest daughter Cho Hyun-ah for the “nut rage” incident on Dec. 5. “I will make sure that Park receives no disadvantages because of the incident as long as he has the will to continue working at the company.”

Park was the purser who intervened when Cho objected vehemently to a flight attendant serving her macadamia nuts in a bag in first class rather than on a plate. She had KAL Flight #86 return to a gate to eject Park.

Park has said he was verbally and physically abused by Cho, who jabbed his hand with the corner of a service manual. “No one could ever imagine the humiliation and shame [I felt that day] without experiencing it themselves,” Park said in an exclusive interview with KBS, a state-run broadcaster on Dec. 12.

Cho Yang-ho was ordered to take the stand Friday to testify whether Park will face recriminations at the company in the future.

At the first hearing on Jan. 19, the court said that the daughter’s “rehabilitation seems possible at anytime.”

During Friday’s hearing, the father and daughter didn’t make eye contact. Even while her father went through his 20-minute testimony, Cho Hyun-ah kept her eyes on the ground.

On Dec. 5, Cho ordered the flight at JFK International Airport in New York bound for Incheon International Airport to go back to gate, delaying the flight by 11 minutes. She claimed that a flight attendant, surnamed Kim, didn’t follow a service rule and ordered Park to get off the plane. The rule - that the nuts should have been served on a plate - turned out not to be correct.

The flight attendant who served the nuts also appeared in court Friday, her first public appearance.

She denied a rumor that she accepted a plum position in return for making statements that defended the behavior of Cho Hyun-ah that day in New York.

Cho Yang-ho was indicted on suspicion of tax evasion in 2001. He was convicted, fined 15 billion won and given a three year suspended jail sentence.