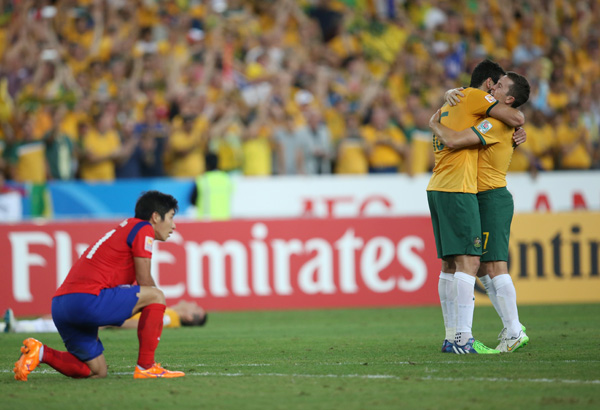 Taegeuk Warriors made it to the AFC Asian Cup final first time in 27 years, but failed to achieve the title losing the final against Socceroos, 2-1, on Saturday at the Sydney Stadium.

Midfielder Massimo Luongo had the opening goal in the first half and Son Heung-min’s equalizer in the last minute of the second half led the match to the overtime, but Australia finally won the cup with James Troisi’s goal in the first half of the overtime, winning its first Asian Cup ever.
Lee Jung-hyup, who scored two goals in the previous games of the Asian Cup, started as a forward in four consecutive times, while Song Heung-min, Ki Sung-yueng, Nam Tae-hee, Park Joo-ho and Jang Hyun-soo were fielded in the midfield. Park, who used to stay defensive mostly, was positioned on the left side this time.

Four defenders who started in the semifinal match, who are Kwak Tae-hwi, Kim Young-gwon, Kim Jin-su and Cha Du-ri, stayed in the starting lineup this time. Goalie Kim Jin-hyeon, who hasn’t allowed any goals, took the goal.

The both sides stayed offensive from the beginning, rarely passing the ball in their own field pressuring throughout the first half.

Socceroos had more threatening chances in the first half. Captain Mile Jedinak’s free kick in the 8th minute missed the goal by inches and hit the upper side of the goal net, and Tim Cahill, who scored three goals until the semifinals, had a close-range effort in the 24th but goalie Kim Jin-hyeon managed to save it.

The atmosphere changed when Son Heung-min had two threatening chance the 37th. Son kicked left full-back Kim Jin-su’s pass toward the goal, but closely missed it. Right full-back Cha Du-ri had his trademark breakthrough on the right field, passed ball to Son, but Son’s effort was deflected by a defender and missed it only by inches.

But it was the Socceroos who broke the deadlock. Luongo had a mid-range effort with his right foot in the last minute of the first half. The ball headed to the right bottom corner of the goal and goalkeeper Kim could not reach the ball.

Trailing 1-0, Taegeuk Warriors grew even more aggressive in the second half. Though three members of the Australia were given yellow cards, in addition to two others in the first half, the only shot on target was Kwak Tae-hwi’s header in the 59th and the game was nearing an end.
Then the match suddenly went into the overtime as Son, who missed some critical chances, got the ball in the penalty box and netted it in the injury time.

But it was Australia again who broke the tie. Tomi Juric managed to keep the ball in the right side of the penalty box and his cross, punched away by goalie Kim, was netted by Troisi in the last minute of the first half of the overtime.

South Korea tried to level the match for the other 15 minutes, but it ended 2-1 at last and Australia won its first Asian Cup.