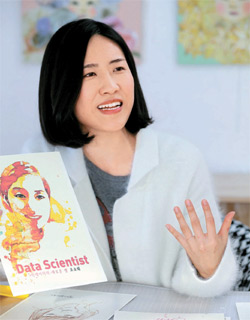 Ahn Gi-eun, who runs her own design studio, presents a portrait she drew. By Oh Jong-taek


Ahn Gi-eun routinely offers to draw portraits of passersby on the street or in subway stations, an interest motivated by a strong belief that everyone has their own story to tell - and that those stories can easily be conveyed in a picture.

“I come up to people and ask, ‘Do you want me to draw a portrait for you?’” she said. “Some are suspicious and ignore the offer, or bluntly say, ‘Sorry, I’m busy now.’”

Ahn, 31, was spurred to draw portraits out of curiosity to find out how different people were spending their lives and going about their day.

Ahn, who heads the design organization Kirina House, has drawn portraits of ordinary people for a decade, which now amounts to more than 300 portraits.

Her goal is to publish a book after she has drawn 1,000 people.

“Even though people may look ordinary, they have different lives and different stories to tell,” she said. “I want to collect those pieces in my art book.”

Some passersby were more open than Ahn could have expected, and told her stories they wouldn’t even share with their families or friends. Since starting the project, she’s formed special relationships with many people, she added.

Ahn’s artistic talents can be traced back to her high school years, when she used to seat her friends to draw their portraits - a hobby in which she was intensely interested, she recalled.

But it came naturally as well, and when college admissions rolled around, she applied to the Department of Visual Communication Design at Kookmin University, where she was accepted.

At first, everything fell together. However, during her sophomore year, Ahn began to have doubts about her career.

“One day, all of the sudden, I felt like I was simply drawing something pretty and my designs seemed meaningless,” she said. “Then I started to think that maybe I should quit.”

During that period, she said, she felt “half crazy,” and didn’t take on any new work. Instead, she indulged herself in humanities texts or simply killed time, Ahn recalled.

But that changed during her senior year after she attended an art workshop. The theme of the event: “What is good design?”

At the workshop, she found herself inspired again and found the answers to the questions that had been plaguing her over the past two years.

“I concluded that as long as my designs impress even a single person, then that is a good design,” she said.

Not long after, she founded her own design studio and started the push to complete her book.

Ahn usually includes a small phrase or story from her subjects on the corner of each portrait. On one of them was the phase: “I will keep my new resolution to last at least three days.”

The project is a great personal lesson, she added, one that she will continue even after her book is published.