Sweet welcome, without the taffy

Sweet welcome, without the taffy 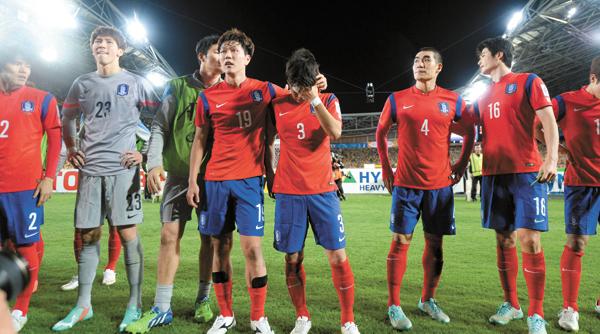 The Taegeuk Warriors console each other after losing the AFC Asian Cup final, 2-1, on Saturday in Sydney, Australia. The team failed to win the title, but their strong performance and positive attitude impressed fans at home. [AP/NEWSIS]

The Taegeuk Warriors, runner-up in the AFC Asian Cup, returned home and were welcomed with flowers, in marked contrast to the Korean taffy thrown by angry fans that greeted them after last year’s World Cup.

The national team spent a month in Australia for the tournament and could not bring home the cup, but players and coaches received an enthusiastic reception from fans and the media on their arrival Sunday at Incheon International Airport.

“Thank you for your warm welcome. The players needed it,” said manager Uli Stielike. “I promised that we would do our best, but could not promise that we would win the tournament due to many variables. And I think players have shown that we’ve kept the promise.”

Captain Ki Sung-yueng also expressed his gratitude. “I appreciate your cheering and support for the past month,” said Ki. “Though we couldn’t win the tournament, I think we did our best. And we will do our best to win the next tournament.”

Even without the title, the Taegeuk Warriors performed well enough to impress fans who were greatly disappointed after the team was eliminated in last year’s World Cup in Brazil.

Given that Stielike’s predecessor, Hong Myung-bo, was criticized for not remaining objective when selecting team members, fans were happy with the German manager because he sent in players regardless of their history or name value, but based on their performance and his tactics. His style resembled that of Guus Hiddink, who led the team to the semifinals of the 2002 World Cup in Korea and Japan.

In the final on Saturday, for example, Stielike shuffled the starting lineup, placing defensive midfielder Park Joo-ho on the left side and center back Jang Hyun-soo as a defensive midfielder to counter the Australian teams strong right-side attack with midfielder Massimo Luongo. Though Luongo had a goal in the first half, he was held in check most of the time by Park and left fullback Kim Jin-su.

Trailing 1-0 in the second half, Stielike moved defender Kwak Tae-hwi to offense, since he is good at competing for long passes. The strategy worked as defenders watching Kwak missed Son Heung-min, who scored the equalizer in injury time.

Another similarity the two foreigners share is they both discovered new compelling players. Hiddink gave Park Ji-sung and Lee Young-pyo a chance in 2002, and Stielike went with striker Lee Jung-hyup, who scored two goals in the tournament, and goalie Kim Jin-hyeon, who allowed no goals until the semifinals.

The Sydney Morning Herald also selected him as the best coach of the tournament, saying, “He hasn’t disappointed. His no-nonsense approach has synchronized seamlessly with the disciplined national stereotype, while leaving just enough creativity for attacking individuals to do their thing.

“Stielike has massaged the egos of the big two, Son Heung-min and Ki Sung-yueng, into delivering every time”

Ki and defender Kim Young-gwon also made saw their names on the local media’s all-tournament team.