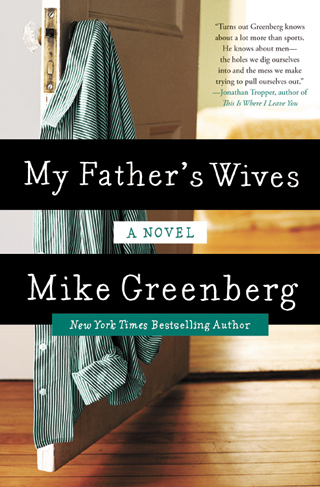 Mike Greenberg knows sports. And talking about them. One-half of the long-running and ever-popular “Mike & Mike” national sports radio show, Greenberg (alongside co-host and former NFL player Mike Golic) spends the morning drive-time period touching on all the prevailing topics of the day in the world of sports.

It’s not all that surprising that Greenberg has parlayed his on-air success into a thriving writing career.

What is surprising, however, is that he’s penning novels, not just sports-themed books.

Greenberg’s latest, “My Father’s Wives,’’ chronicles two weeks in the life of the narrator, Wall Street banker Jonathan Sweetwater, whose life is turned upside down when he is faced with the possibility that his marriage is not what he believed it to be.

This epiphany propels Sweetwater on a search for answers - not just about the status of his relationship with wife, Claire, but also about his late father, U.S. Sen. Percival Sweetwater III.

The five-term “liberal lion” was a friend and confidante of presidents and a champion of his constituents, but a barely there father to Jonathan. Percy married five more times after divorcing his first wife, Jonathan’s mother.

Spurred by a need to learn something, anything really, about the man he never knew, Jonathan travels far and wide - London, the Caribbean, the mountains of Colorado and more - to meet with the half-dozen women with whom his father shared his life.

“I feel like there was some answer I’ve been waiting all my life for,” Jonathan tells wife No. 6, a psychiatrist named Diane Gray, during their meeting in New York.

On the surface, “My Father’s Wives” appears to be an examination of relationships. Fathers and sons. Husbands and wives.

It is that for sure. But it’s also so much more.

The book has a detective-novel feel. What’s going on with Jonathan’s marriage? Will he find all the wives? What will he learn when he gets there?

As Jonathan flies, drives and even hikes on his global trek for answers, the reader is along for each satisfying twist and turn of the journey. And is as invested in it as the protagonist himself.

Greenberg accomplishes this with fully realized characters, deft pacing and spot-on dialogue. The author has the rare gift of making characters talk like real people do.