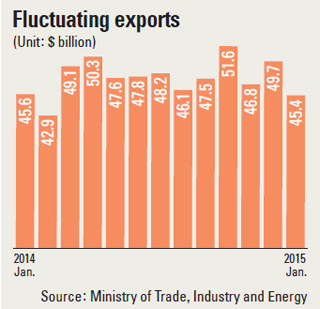 Exports, the main pillar of the Korean economy, slid in January from a year earlier largely due to falling international oil prices, said the Ministry of Trade, Industry and Energy on Sunday.

But Korea’s trade surplus jumped owing to a remarkable drop in imports, said the government.

As a result, the trade surplus stood at $5.53 billion, a significant growth from an $810 million surplus in the same month last year. The country posted a trade surplus for the 36th consecutive month.

Both imports and exports were notably influenced by slides in international oil prices.

The average price of Dubai crude oil has plummeted to $45.8 per barrel from $104 per barrel in January 2014, according to the ministry. Dubai oil accounts for more than 80 percent of the country’s total oil imports.

As a result, imports of oil dropped nearly 42 percent on-year to $5 billion last month from $8.6 billion a year earlier and imports of petroleum products like gasoline and diesel plunged nearly 52 percent to $1.5 billion.

“Except for petroleum and petrochemical products, total exports of products rose nearly 7 percent in January on-year, which showed strong increases in exports of goods that are not affected by oil price falls,” said the ministry in its monthly trade report.

Exports of semiconductors, the No.1 export item for Korea, shot up almost 14 percent on-year January. Exports of ships surged about 63 percent. Outbound shipments of Korean mobile phones dipped nearly 2 percent last month due to intensified global competition with Apple in the U.S. and China’s Xiaomi. Exports of automobiles inched down about 4 percent and those of steel products dropped about 2 percent.

Exports of petroleum products plunged 38.5 percent on-year to $2.92 billion although the shipment volume of those products rose about 13 percent to approximately 45 million barrels.

By country, exports to the United States expanded about 15 percent from a year earlier, while the country’s exports to China, the biggest market for Korean products, inched up about 5 percent during the same period. To Japan, the volume of Korean products shipped dropped about 19 percent. Exports to 10 member countries of the Association of Southeast Asian Nations slid about 8 percent, the ministry data showed.